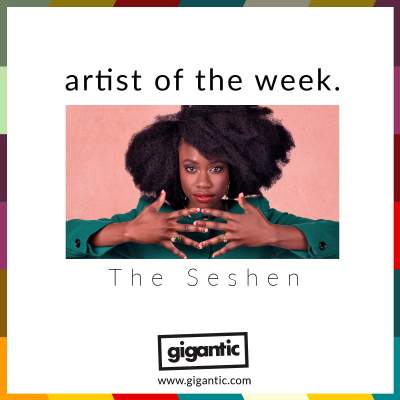 San Francisco based six-piece The Seshen combine elements of funk, R&B, synth-pop and psyche to create a sublime fusion of silky-smooth sounds which provide the perfect sumptuous sonic backdrop to layer challenging and thought-provoking lyrics upon.

Led by singer Lalin St. Juste and the bands bassist / producer Akiyoshi Ehara, The Seshen is also made up of drummer Chris Thalmann, percussionist Mirza Kopelman, Mahesh Rao on the keys and samples expertly provided by Kumar Butler.

The Seshen first album was the self-released eponymous title which they unveiled in 2012 on Bandcamp. Their debut full length record succeeded in courting critical appraisal form the music press in all quarters whilst also galvanising their growing local fanbase which then spread beyond their West Coast confides and directed towards and international audience.

This massive rise caught the attention of Tru Thought Records who signed them for the subsequent release of their EP ‘Unravel’ which was seized upon by the likes of Tom Ravenscroft and they soon heard their tracks being played on BBC 6 Music, spreading their sound across the UK.

They remained with Tru Thought Records for the release of their sophomore album ‘Flames & Figures’ which took two years to create. The time was spent honing their sound and creating thirteen flawless and expertly layered tracks, dense with addictive rhythm, which deal with themes of femininity, power and the contrast between appearance and reality, looking at the subsequent effects these have on our sense of identity.

The album culminates with the incredible final song ‘Colours Collide’ which is a psychedelic exploration in search of the self in retaliation of the society and institutions that surround us and seek to stamp their own definitions upon us.

“Colors Collide is about the illusory spaces that are created for us and how we wrestle with the identities and experiences that grow out of those creations. It reflects the journey of leaving this current space for another. Perhaps in this next place I can be free. It’s not a physical space, but rather, the place within myself that I hope to reach.” - Lalin St. Juste

‘Flames & Figures’ emerged to immense fanfare in October 2016, featured by such crucial tastemakers as CLASH, The Fader, The Skinny whilst benefitting from prominent airplay on KEXP and continued support from the BBC with Huey Morgan, Lauren Laverne, Steve Lamacq and Tom Ravenscroft all playing them on their shows.

This Autumn sees The Seshen make their way to the UK to tour extensively. Starting at the brand-new Nottingham venue Metronome which boasts state of the art sound and visual technology, they work their way around the country with dates at Manchester, Birmingham, London and Brighton.

Tickets are on sale right now so do not miss your chance to see this true spectacle perform on a stage near you by booking right now!

The Seshen tickets are currently available.