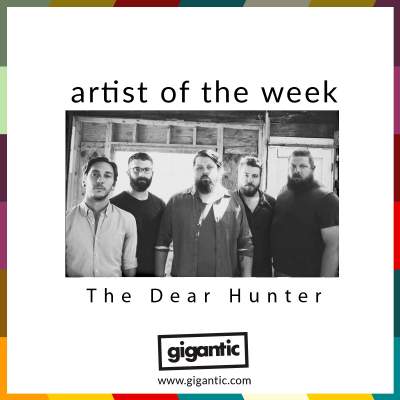 A truly great musician cannot be confined to a single sound or genre which is why songwriter Casey Crescenzo has expanded his oeuvre from his post hardcore background with Massachusetts band The Receiving End of Sirens and started The Dear Hunter – a band which embraces a wide sphere of styles including neo classical, progressive rock and baroque pop.

This year sees Crescenzo enlist the aid of composer Brian Adam McCune and the Awesöme Orchestra for the release of enchanting instrumental double album ‘The Fox and the Hunt’ before heading to the UK to play shows as The Dear Hunter.

Casey Crescenzo originally formed The Dear Hunter as a side project to post hardcore band The Receiving End of Sirens in 2006. Having appeared at the 2005 Warped Tour and hit the road hard for the past three years playing alongside such hard rock acts as Thirty Seconds to Mars, Funeral for a Friend, Saves the Day, Senses Fail and Thrice; he wanted to stretch his mental and creative muscles and begin to embrace his classical side and explore a greater sphere of sound, including aspects of progressive rock.

Whilst working on debut album ‘Act I: The Lake South, the River North’, The Dear Hunter would become his main focus finding it engrossing most of his time and efforts and Crescenzo left The Receiving End of Sirens in 2006 – later returning when the band re-joined after their hiatus in 2010.

As The Dear Hunter, Crescenzo began to enjoy praise as the first LP expanded into a six-part musical voyage of a fictional protagonists life; a daring project which has taken over a decade to realise. In that time, Crescenzo has found the approval as a skilled songwriter he has craved, applauded by both his growing fanbase and critics alike. His further works have included albums ‘The Color Spectrum’ (2011) and ‘Migrant’ (2013).

This year sees Crescenzo release his greatest creative endeavour yet; the evocative and playful orchestral double album ‘The Fox and the Hunt’. Created in collaboration with composer Brian Adam McCune and enlisting the aid of the San Franciscan group Awesöme Orchestra; the instrumental album sees the daring musician rise to ever greater artistic heights

Casey Crescenzo has announced UK dates as The Dear Hunter schedules for September 2021 with tickets on sale with Gigantic. Do not miss out on your chance to experience these wonderful performances and book today!