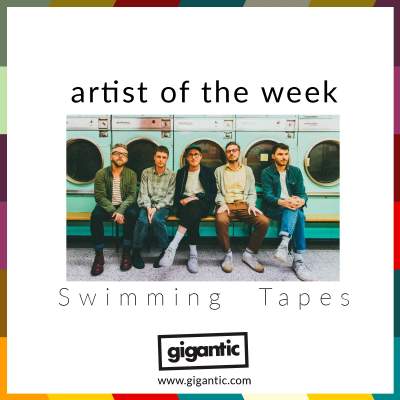 Capturing a lost sense of romance from the years gone by, Swimming Tapes combine the bright tones of 60’s surf, the hazy sensibilities of shoegaze and the wide-eyed idealism of dream pop. This year has seen the release of their highly acclaimed debut album ‘Morningside’ which they promote with an Autumn tour – tickets on sale with Gigantic right now.

Formed after Northern Irish friends Robbie Reid (guitar/vocals), Jason Hawthorne (guitar), Louis Price (guitar/vocals) and Paddy Conn (bass) relocated to London and met Andrew Evans (drums); Swimming Tapes first began making waves with the release of their gorgeous first single ‘Souvenirs’ back in March of 2016. The bright and breezy song, awash with reverb and tinged with nostalgia hinted at exciting things to come and proved their immediate potential when most bands take years finding their own sound before burning out. It would come the be the title track on their debut EP the follow year, which also featured the crystalline sounding single ‘Hit The Fire’, echoing ‘Tides’ and the forlorn memories recalled in closing song ‘Cameos’ all served to prove that the creative high point of their initial single was no fluke.

Keeping the ball rolling, the boys also brought out their second EP ‘Soft Blue Sea’ in 2017. Kicking off with ‘When We Can Hide’, it retained their signature melancholic romance but added an extra bit of punch to the mix. This newfound sense of urgency continued in following tracks ‘Alison’, ‘Queen’s Parade’ and could even be sense in the more relaxed ‘What’s On Your Mind’ which felt Swimming Tapes were tightening up and getting ready for bigger things.

Throughout 2018, they would focus on their live appearances, kicking off the year as part of Sound City in Liverpool and picking up a slots at The Great Escape – plus, they headlined their own tour in November which saw them appear at such vital hotspots as YES in Manchester, SWG3 Poetry Club at Glasgow, Oporto at Leeds, Rough Trade Bristol and returning to their adopted home to play charming East London venue Moth Club.

Having attracted fans all around the UK with their stunning performances, focus shifted back to the studio as it was clearly the right time to get their first full LP recorded. The boys selected to record their debut album in their favourite studio, a small space hidden away behind a pub in Haggerston, East London. Making good use of the abundance of vintage equipment including a 1970’s SLS mixing desk, Swimming Tapes were able to record the vast majority of what would become ‘Morningside’ live which captured the energy of their shows whilst giving a natural feel and timeless element to the record in keeping with the sentimental sound. Adding just a few overdubs here and there, the masters were then handing over to Tom Shick (Real Estate, Iron & Wine) to be mixed at The Loft – the studio owned by Chicago alternative rock band Wilco.

“Tom is amazing. And he did such a good job. Obviously, to have anything connected to Wilco is pretty cool. The Loft is amazing as well. It has so many interesting things. You can go on their website and look through all the instruments they have. They must have millions of dollars worth of collectible guitars.” – Robbie Reid

‘Morningside’ features the singles ‘Pyrenees’, ‘Passing Ships’ plus ‘Keep Her Closer’ and succeeds in keeping their wistful feel yet progressing in scale and confidence to be ready for a larger audience which will no doubt come having signed to iconic indie label Sub Pop. This year, Swimming Tapes will kick off yet another headline tour in November but this time in bigger venues matching their growth in stature and recognising a band which is clearly on the rise.