AOTW // Sons Of The East 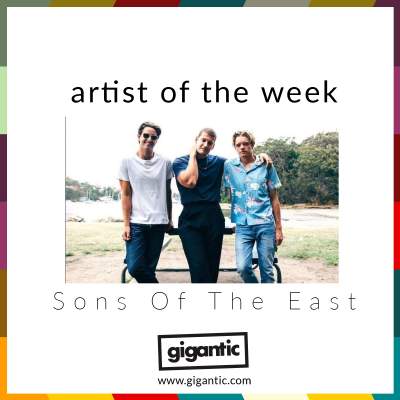 Sons Of The East are the indie folk three-piece that encompasses the huge talents and charisma of band mates Daniel Wallage, Jack 'Danger' Rollins and Nic Johnston from Sydney. Drawing on a wide spectrum of folksy influences whilst being firmly rooted in the present, the audacious Australians are a vital new sound for the genre. It is this juxtaposition between the familiar feel of the past with       the urgency of the new that has earned them a massive following, seeing their music receive a combined 70 million streams with 16 million views on YouTube alone.

Despite the melodic nature of their music, they’re known for their high-spirited and rowdy live performances which always make for great gigs, entertaining fans all around the globe.

Formed in 2011, Sons Of The East quickly gained a reputation for their rambunctious live performances. However, they were also able to reveal their tender side by entering the studio to create their eponymously titled five track EP which was released in August of 2013.

Critics were initially attracted by their unique twist on traditional folk melded with my contemporary styles exhibited on their first record. They were truly blown away two years later by the release of second EP ‘Already Gone’ which showed considerable development and marked them as ones to watch by the music press.

They release their brand-new EP ‘Burn Right Through’ in April of this year which is expected to a true creative high for the band.

The past year has seen the band move truly make their mark on the world, heading out to the USA to play an extensive tour which included an appearance at SXSW before retuning home to play sold out shows in Sydney and Melbourne. Later in 2018, their passports received many more stamps due to a huge European tour which saw them play fourteen dates across seven countries including the UK.

This year, the dudes from Downunder will release their third extended player ‘Burn Right Through’ and Gigantic has tickets for Sons Of The East the UK leg of their upcoming Spring tour. This is their most ambitious tour to date and sees them appear at 40 venues plus festivals. They return to our shores to play in May.

Sons Of The East tickets are currently available.

Sons of the East Tickets