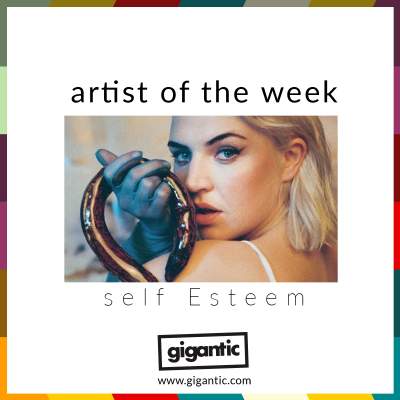 Having first reached audiences as one half of Sheffield’s indie pop sensations; Slow Club, Rebecca Taylor has begun working as a solo act titled Self Esteem since the band split in 2017.  Having previously felt she was stifled creatively and personally being in a band, her new-found independence has given her the freedom to more fully pursue the many aspects that all feed into her creative pursuits.

“My band Slow Club started when I was about 16. I’m very proud of what we did but I never felt comfortable at an indie level - or with the rules involved in that. I never felt ok being cool and relaxed. I wanted more. So here we are.”

Whilst working in Slow Club, Taylor found she was often being told how to act, what to look like and even what music she was allowed to produce. Rather than bow down and accept the limitations placed upon her by the expectations of others, she became energised by her love of pop, hip hop and even gospel, and the process of discovering her own unique synthesis of her differing influences.

"It was just such a dirty thing I couldn't even explore. But I remember everything changed when 'I heard My Beautiful Dark Twisted Fantasy' by Kanye. I used to just sit and play along to it on the drums. And I still like those other things, I still like Bright Eyes, but it's nothing compared to Destiny's Child 'Writing's on the Wall', or all Rihanna songs."

The resulting sound she discovered for herself was a confident new take alt pop which expertly merges various styles as a platform for her insightful lyrics, first exhibited on her debut single ‘Your Wife’.

Released in the Autumn of 2017 by Kick And Clap Records, ‘Your Wife’ draws a line in the sand and clearly defines the sort of male behaviour she is no longer prepared to tolerate.  It saw her work with by Dave Maclean from Django Django with whom she toured as support.

Expression, of course, takes many forms and Taylor is keenly aware of the need to impress whenever she makes a live performance. This dedication to stage presence translates into coordinated clothing for the band, dramatic poses and expressive dance routines which make her truly stand out from her contemporaries.

“Over the years I found live shows to be more and more fucking boring. I always wanted to put on a show. I realise now how much people want a show. You could just listen to the record at home in your pants vaping which would always be better. I want to make it worth your while putting your trousers on.”

This year has already seen the release of latest single ‘The Best’ which marries frustration of a failed relationship with cool beats and will feature on her highly anticipated debut album ‘Compliments Please’. Released on CD, MP3 and vinyl on the 1st of March, Taylor commences her promotional tour later in the month giving you the chance to see Self Esteem play on a stage near you very soon! Tickets are currently on sale but are expected to go quickly, so grab yours before they’re all gone.