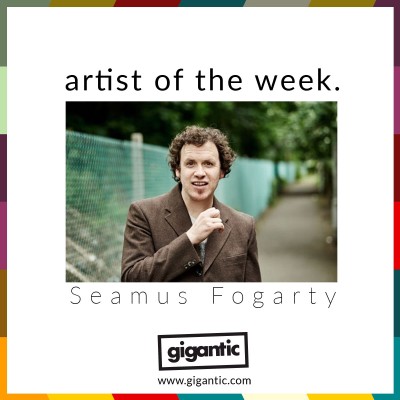 Hailing County Mayo on the west coast of Ireland, Seamus Fogarty augments his impressive folk song writing style with subtle use of electronica to create an encompassing sound full of heart with an added layer of intrigue. His loyal listeners include such esteemed music publications CLASH, Pitchfork and The Quietus, having already impressed with innovative debut album ‘God Damn You Mountain’ which came out in 2012 plus the ethereal ‘Ducks & Drakes’ EP, released three years later.

Last year saw the release of his latest LP; ‘The Curious Hand’ which continues his unique amalgamation of tradition styles with modern technology and is widely regarded as his best work yet. Fogarty recruited the aid of Leo Abrahams (Brian Eno, Frightened Rabbit, Wild Beasts) to produce a record that tells of his experiences of moving to London and making sense of his new surroundings.

The eleven tracks start with the sombre introduction song ‘Short Ballad For A Long Man’ which tells of how the 250-year-old skeleton of Irish giant Charles Byrne came to be displayed in a museum located in the English capital before escaping into the country with the single ‘Heels Over Head’ and exploring ‘St John’s Square’ through a curious instrumentation track of sampled percussion.

Standout tracks include ‘Van Gough’s Ear’ which compares the often mis-recounted tale of the Dutch post-impressionist artist’s self-mutilation to the wilful deaf, dumb and blindness of commuters and tells of moments of beautiful folly with his friends, plus the title track which includes exerts of conversations about technological progress which gives the feel of listening in on friends in the back of a pub and ‘Seems Wherever’ which forlornly tells of heartbreak and loneliness whilst lost somewhere deep underground in the worming tunnels of the tube.

‘The Curious Hand’ is the thoughts and feelings of the eloquent outsider as they embrace the adventure of their own life, feeling the traditions of the past fill his veins and bestowing a vigour and excitement for wonder as they discovering the new. This is reflected in how seamlessly the music flows from sublime folk to complexed loop sampled electronica whilst retaining an earthy and distinctly tangible quality.

Seamus Fogarty will be playing around the UK this Autumn and tickets for his November dates are on sale with Gigantic.