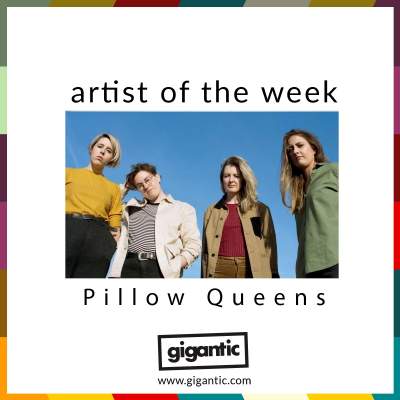 Irish indie rock has new champions in the form of thrilling rising band Pillow Queens. Daringly different but with tremendous mainstream appeal, they have just launched debut album ‘In Waiting’ ahead of a UK tour!

“We’re a four-piece from Ireland, half of us from Dublin, half from the outside of Dublin. We make music that’s been described, rather delicately by Blindboy, as a mix between Sonic Youth and Dolores O’Riordan” – Sarah Corcoran

Forming just four years ago, Pillow Queens music has seen them already amass a strong fanbase with their sound that embraces scuzzy guitars, bright melodies and embracing their distinct accents. Choosing to embrace politics, they address social issues as we as their own queer identity which made early EPs ‘Calm Girls’ and ‘State Of The State’ essential listening.

“It might grate on some people, which is inevitable, but feck them. It is what it is. Even if we didn’t use our accents, we’d still annoy someone.” – Sarah Corcoran

When it came time to record their first album, the band retreated to a studio nestled in the rural northwest of Ireland at Donegal. Something about the grander of the widescreen landscape poured into the music as debut LP ‘In Waiting’ expands on their sound and elevates it to even greater thrilling heights.

Released at the end of last month, ‘In Waiting’ includes the energetic single ‘Handsome Wife’ which describes the longing for home whilst living on the road. Tinged with nostalgia and romance, it’s the queer anthem that is breaking through into the straight world celebrating the LGBTQ+ enclaves that can be found in every community. Tender and euphoric, it’s a joyous listen with a warm rallying cry which is a highlight of their live sets.

“It’s funny. The song was inspired by coming home from tour and looking at the world in a very romanticised way. It kind of became a little bit of an anthem in championing a way of life which may not be this cookie cutter image of what your life should be.” – Pamela Connolly

It’s been a long time since Pillow Queens have been able to take to the stage and so excitement is riding high for the band and their followers alike. Catch them when they tour their first album ‘In Waiting’ in Spring ’21 plus the make an appearance at exciting new Sheffield festival Get Together too – tickets all available with Gigantic!