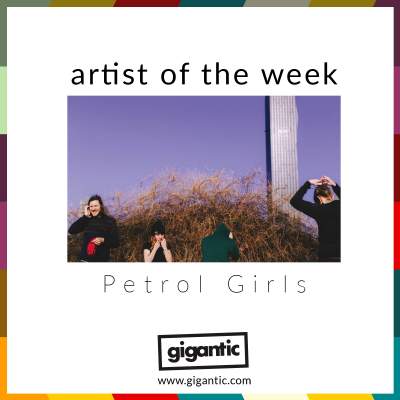 Russian anarchist, feminist and agitator Emma Goldman is often misquoted as saying; “If I can't dance, I don't want to be part of your revolution” and hardcore punks Petrol Girls seem to be the very soundtrack to that uprising. Taking their name from Pétroleuses – the Molotov cocktail wielding female warriors of the Paris Commune; their vitriolic music takes down gender norms, nationalism and the dehumanising effect of capitalism.

This year has seen the release of their second album ‘Cut & Stitch’ which they take on the road in 2020.

All the best bands are formed spontaneously and ride the passionate wave of their own enthusiasm. Petrol Girls was first started by vocalist Ren Aldridge to play a house party in celebration of International Women’s Day, playing to a live audience after just two practices. Sticking with bassist Liepa Kuraitė who was present at the very first performance, the band would undergo many line up changes before settling with drummer Zock Astpai and Joe York playing guitar.

Their righteous rage would translate into wild live performances and two killer EPs including their self-titled debut in 2014 followed two years later by ‘Some Thing’. The aural agitators would release their first full length record ‘Talk Of Violence’ in 2016 which would be a full on assault on patriarchy and a call to arms to eradicate heteronormative oppression. The anger screamed with such favour couldn’t fail to draw in dedicate recruits to become loyal fans on the band.

Just when you thought you couldn’t love Petrol Girls even more, they come back with ‘Cut & Stitch’ – their most thrilling record yet! The band have developed the sound and finely tuned their ferocity into a more articulate anger expressed with death disco riffs and angular math rock. It’s this perfect mix of fiery feminist polemics and catchy hooks that avoids the trap of being too on the nose with the politics and ensures that all fifteen tracks are an adrenaline rush of punk rock rather than a stuffy lecture.

Check out the sheer rage of ‘Monstrous’ and ‘Talk In Tongues’, the wildly winding guitars on their single ‘Big Mouth’ and the devastating finisher ‘Naïve’ which brings bring their second LP to a truly climatic end.

Petrol Girls will be kicking off 2020 with a January tour with tickets on sale with Gigantic. Grab yours today!