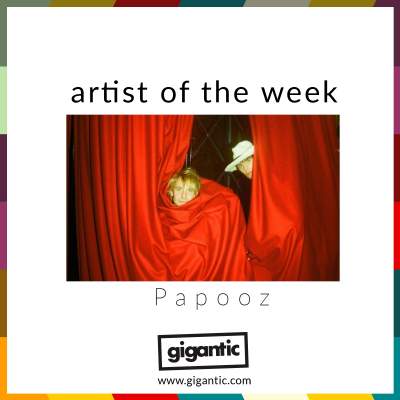 Following on from cutesy disco inspired debut album ‘Green Juice’ which made them an international cult hit, Parisian pairing Armand Penicaut and Ulysse Cottin now return with second Papooz LP ‘Night Sketches’ which takes a slightly seedier descent acting as the soundtrack to the pursuit of the desires of the dark.

Make sure you see Papooz when they head on over to the UK to play a major gig in the capital, headlining at London Oslo on Tuesday 9th of April.

Rather than meeting at a gig and hitting it off after discovering a shared love of music as so many other bands and projects are first formed, Ulysse Cottin and Armand Penicaut became friends having both been hanging around the literate meets of Paris. Finding it more fun to bunk off the studious gatherings to hang out, smoke weed and try to start their very own French revolution by penning a political zine, the teens became close friends. It was only after they had been writing together for some time did they realise their united passion for tiki inspired tunes and the bossa nova pop sound of the sixties which led to them first making demos together.

“We started as a lo-fi band. We recorded where we could, with Ulysse in his bedroom in Paris, with a couple of cheap acoustic guitars, ukuleles and synths.” – Armand Penicaut

In 2016, they released their debut album ‘Green Juice’ which was a playful mix of geek chic disco and laid-back lounge. Their first full length record included their hit single ‘Ann Wants To Dance’. Boosted by a quirky promotional video directed and shot by indie pop icon SoKo on location in Greece, it has racked up over 12 million streams online proving the popularity of their very idiosyncratic sound. Realising the power of their visual element, they recruited Daniel Brereton who has worked with similarly charismatic acts Kate Nash, Metronomy and Django Django to direct the video to their bouncy song ‘Trampoline’.

Papooz have just dropped their second album ‘Night Sketches’ through Half Awake Records this month. Recording was split across sessions at La Frette, the 19th century mansion recently used by Artic Monkeys to create their Kubrick oddity album ‘Tranquillity Base’ and Delta Studios. They have used the luxurious work spaces to explore more fully their passion for pleasure and come up with a record decidedly seamier than the last.

The louche LP features tracks like ‘Danger To Myself’, a semi-autobiographical warning of the dangers of decadence spilling over into self-destruction, ‘Downtown Babylon’ describing the hedonistic night life found on the French Atlantic coast and their humour continues to shine through on ‘Bubbles’ which describes the existential crisis that come in the bathtub. Silky single ‘You & I’ would be a sweet ode of affection if it wasn’t accompanied by a delightfully debauched video directed by Victoria Lafaurie which feels like a surreal crossover of classic crime flick ‘Carlito’s Way’ and black comedy ‘A Live Less Ordinary’, perfectly capturing the comic yet sordid feel that permeates throughout ‘Night Sketches’.

Having previously sold out their previous gigs at the charming Moth Club, The Sebright Arms and even Scala, Papooz are coming back for an unmissable performance at London Oslo to showcase their new material and Gigantic is very excited to be able to offer you tickets. But don’t hang about, because we know this show is going to sell out – fast!