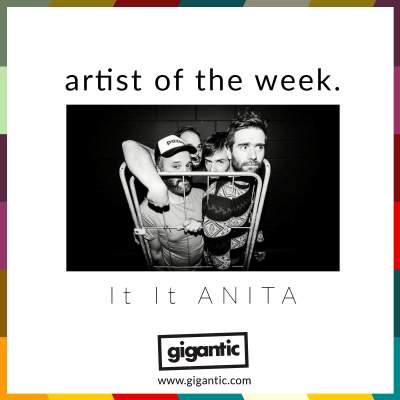 Bursting out of Liège, Belgium, It It ANITA combine the epic scale of post rock with the intriguing technical skill of math rock and apply this to the furious slanted drive of post punk to produce the nasty rasp of many layers of stomp boxes which feels oh so very good with measured and melodic song writing. Having proved themselves at such major festivals as FME, Eurosonic, Le Printemps de Bourges and The Great Escape, they have grabbed the attention of a growing international audience as the big noise you need to know.

Band members include drummer Bryan Hayart, Damien Aresta joined on guitar with Mike Goffard who provides the vocals and Elliot Stassen on bass.

After the release of a self-titled EP in 2014 followed by second EP ‘Recorded by John Agnello’ a year later, It It ANITA headed out to New York to record debut album ‘Agaaiin’ at the White Music studio with legendary producer John Angello whose has worked with such alternative luminaries as Patti Smith, Dinosaur Jr. and Sonic Youth. The result is a record that swaggers with confidence, laying down a huge basslines that threaten to knock the listener over on ‘III’ only to veer further leftfield with eerie stripped back songs like ‘Parsnip (Terminal)’ or the inexhaustible unhinged energy of tracks like ’25 (From Floor To Ceiling)’, ‘Jean-Marc (Jean-Marie)’ and album closer ‘6-4-2 (New Beet)’. Released in 2016, ‘Agaaiin’ certainly marked the Belgium boys as ones to watch.

Showing no signs of the infamous ‘Difficult-Second-Album-Syndrome’ which can so often knock a seemingly promising new act off track forever, It It ANITA have returned this year with second LP ‘Laurent’ which saw them stay home and draft in their tried and tested sound engineer Laurent Eyen who captured the intensity of their live shows in three sessions spread across from June of 2017 until January at Koko Studio in Sprimont.

Somehow, ‘Laurent’ is even more urgent than their first full length outing and kicks off with two singles; the off-kilter anthem ‘Denial’ and explosive ‘User Guide’ before breaking out into an all-out sprint with ‘Another Cancelled Mission’ which hurtles onwards with unstoppable precision.

‘Laurent’ barely allows the band to stop for breath as the continuing tracks ‘11’ and ‘Say No’ (also a single) continue the relentless rollercoaster, only finally coming to some sort of break with the immense post rock monster ‘Tanker 2, Pt.1’ which is so big its is accompanied by the soundscape of ‘Tanker 2, Pt.2 – Myriam Leroy’. The closing songs explore various aspects of no wave and blistering alt rock only to finish with ‘We Are Nothing’ which is a masterclass in welcome post rock meandering before ending on a rousing decay of distortion.

It It ANITA have already commenced an extensive promotional tour right across Europe in support of ‘Laurent’ and UK fans will be delighted to hear that they are coming to our shores to play gigs later this month.

They first play The Waiting Room in London where they will be joined by This Be The Verse and Exoskeltons before heading north to play quaint converted former fruit stall JT Soar in Nottingham for DIY promoters Buttonpusher who specialise in selecting the very best in angular riffs and intense infernos of distortion.

Marty Toner of Buttonpusher has chosen to It It ANITA partner with complexed Bristolian band Last Hyena, brooding and atmospheric Lincoln act tiger warsaw plus rising local alt rock stars Dim Bulbs to complete and incredible line up. Toner had this to say about the night; “Every time we bring a Belgian band to JT Soar they absolutely smash it... It It ANITA are one of those bands we simply can't wait to see live and this will also be their first time in Nottingham"

It It ANITA tickets are currently available.