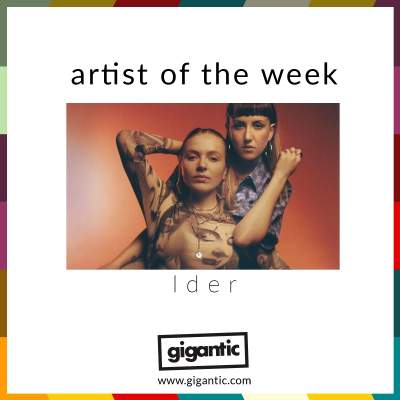 IDER are the powerful take on alt pop from London based friends Lily Somerville and Megan Markwick.

Tastemakers have been electrified by the release of their debut album ‘Emotional Education’. Released earlier in the year, it reveals two song writers who are present the challenges of anxiety, heartbreak and uncertainty of the future that face their generation through their own, very personal, experiences.

“We hope that it connects, and that it can help people to not feel alone. It’s raw and real and comes from a really personal place.” – Lily Somerville

Megan Markwick and Lily Somerville met whilst both studying music at Falmouth University six years ago. The pair quickly realised how perfectly they harmonised; not just their perfectly matched vocals but also in terms of attitude, outlook and ambition. It was the birth of an exciting new band.

Now in their mid-20’s, Somerville and Markwick pour their lives into their music as first heard on debut single ‘Sorry’ which is an emotional exploration of regret as expressed through a minimalist take on R&B which was released in 2016. It would soon be followed by a quick succession of impressive singles throughout the year, including pensive song ‘Pulse’, beguiling ‘King Ruby’ and the rising power of ‘Million’.

With their creative force truly unleashed, the next twelve months would see a flurry of activity in the studio and their first EP ‘Gut Me Like An Animal’ plus the singles ‘Learn To Let Go’ and ‘Body Love’ which all came out the following year. In 2018, they dropped their euphoric single ‘Mirror’ which embraced electro and lent itself well to remixes and was reworked by Honors and 12welve. It would also become the first track on their exceptional debut album ‘Emotional Education’.

Released earlier this year on Glassnote Records; ‘Emotional Education’ is the story of both members lives as told as a collective through their powerful take on alt pop and electronica. As well as ‘Mirror’, it includes the rousing single ‘Wu Baby’ plus ‘Saddest Generation’ which details the death of a relationship.

“It couldn’t have been written by anyone else. We couldn't have written this record, and gone in so deep, and actually called it ‘Emotional Education’, if we didn't have the relationship that we have. Because our friendship and our unique thing, is at the core of everything. It's the whole point of the music.” – Megan Markwick

Most tracks first started as the work of either individual member and so express their own personal experiences, feelings or views before the other comes on board to flesh out the song and take it as far as it can go.

“Part of the collaboration is knowing when to step back and let the other person run with something.” – Lily Somerville

Don’t miss your chance to see IDER perform live. The pair have announced a handful of essential headline dates to promote ‘Emotional Education’ which gives you the chance to really hear just how mesmerising their vocal harmonies are. IDER tickets are on sale with Gigantic right now!