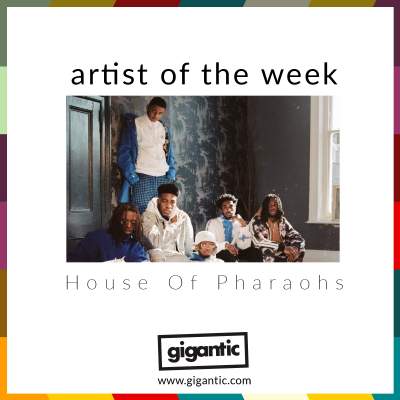 London based hip hop collective House Of Pharaohs combines elements of drill and grime without ever falling completely on to one side. Bursting with fresh young talent, their members include teenage to mid 20’s models, designers, producers and videographers revealing the new generation and the future sound of rap.

Positivity and self-improvement for the core pillars to these city kings, developing themselves alongside their music. Their members include Kevin Taylor, Blaze, Danny Stern, Bandanna, AJ and Sam Wise.

“We aim to be the best as we can as people. And so, House of Pharaohs allows people to feel other ways and express themselves individually, too. That’s our art.”

In the summer of 2017, a new sound started coming through the airwaves. Frank Ocean had found a fresh new sound and began playing energetic new track ‘RWM (Run With Me)’ on his station Blonded Radio. Bursting with energy, it was the first introduction of rap crew House Of Pharaohs to a larger audience and signed to start of a movement. Their profile was instantly raised and the hype would lead to an invite by Charlie Sloth to join infamous Birmingham star Charlie Sloth on The Plug Tour which took them around the UK and even included dates in Italy and Amsterdam.

They quickly followed up their initial successful song with killer single ‘London’s Finest’. Director Jack Bridgland was brought in to capture their street attitude and the reality of life in the capital of black youth moving up as described in the lyrics, which they paid for with a sponsorship with Nike.

"The sounds from the track give off a grand feel, whilst pushing the aspirational sentiments through our lyrics that we had in mind during school and currently as a group.”

Anyone else would have been happy with the massive achievements in such a short time. But HOP are all about reaching and succeeding and so they also dropped their mixtape ‘Real Faces’ in the same year – proving that they are truly unstoppable.

HOP had already impressed in their first year showing an inexhaustible level of creativity, an 2018 saw them step it up even further with the release of their first EP ‘The Fix’. The five tracks showed a real range of sound, tapping into psychedelic feels plus bringing the aggression when needed, and proving that they definitely were not short of ideas. They kept the ball rolling playing shows and releasing yet more singles, including ‘SNATCH’, ‘Admin’ and ‘Submarine’.

The collective have continued their constant rise, kicking off 2019 with the release of the singles ‘Magic City’ and ‘Wonderland’ which would feature on their follow up EP – ‘Seasons’ which got a huge response from online critics and their rapidly growing fanbase alike. Never resting, they have also dropped swaggering single ‘Whatchamacallit’ plus teamed up with Kenny Allstar for Mad About Bars cypher which was hosted by Mixtape Madness.

Next month sees House Of Pharaoh hit the road, tearing around the UK on their own headline tour giving you a chance to see them live on their way to the top.