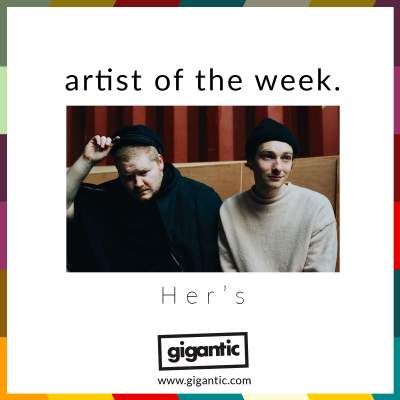 The very best bands are those who are able to project the image of an imagined world of their very own, one so strangely other and yet tantalisingly inviting, you cannot wait to plunge straight in. The music of Her’s cherry picks the favourite twentieth century sounds of guitarist Stephen Fitzpatrick and bassist Audun Laading who skip from jazz to art rock, laid back lo-fi pop and 80's new wave to somehow conjure imaginations of chic Parisian smoke filled clubs, dripping with decadence and opulence.

Having met in the university canteen whilst studying, Norwegian Audun and Fitzpatrick from Barrow bonded having similarly both grown up by the sea and a shared capricious sense of humour which reflects in their music.

They have subsequently remained in Liverpool, a city known for its pioneering attitude towards pop which has embraced their pair as part of the new generation of acts currently bursting out of the city.

They have had a busy year already, having signed to Heist Or Hit for the release of their compilation record ‘Songs Of Her’s’ back in March which includes all their initial material such as early singles ‘Dorothy’ and ‘What Once Was’  which saw them become the darlings of such esteemed publications as DIY, Fader and The Line Of Best Fit, serving as a perfect introduction to the duo’s laidback elegant and yet somehow joyfully odd style.

Wasting no time, Fitzpatrick and Laading also brought out their wonderfully titled debut studio album ‘Invitation To Her’s’ in August after introducing the LP with the forlorn single ‘Love On The Line (Call Now)’, angular second offering ‘Low Beam’ and stand out song ‘Harvey’ which glistens like a slowly revolving disco ball and acts as the perfect starter track to the album.

The three singles delightful eclecticism typifies a charming album which rolls from jangly indie pop to suave crooning via woozy doo-wop and kitsch tiki bar background music. ‘Invitation To Her’s’ culminates with the pairs latest single ‘Under Wraps’ which ebbs and flows like the coastal tide upon a dreamy sun bleached beach and feels like their most accomplished work to date.

This month sees Her’s look to close their industrious year with a tour that takes them around the UK. Looking set for even bigger things next year, make sure you get your ticket so you can say you were among the very first to see them live.