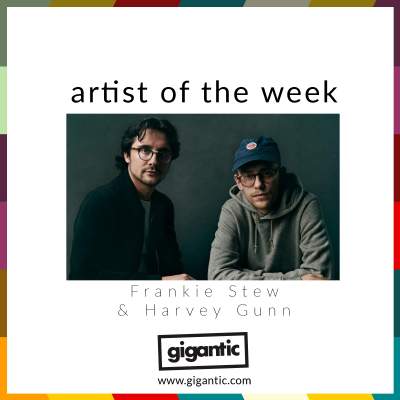 Bursting out of Brighton, Frankie Stew & Harvey Gunn are the new sound of British hip hop which needs to be heard. Their project was first started when they were teenagers after being heavily influenced by Mike Skinner and The Streets. However, refusing to be mere copy cats, the partners began drawing on a wide sphere of musical interests including R&B, dance and UK garage to create nuanced tracks that don’t fit neatly into any one genre which make for compulsive listening.

“I think our sound has progressed and also matured as the years have gone by, I feel as if it’s grown up with us, it sounds weird but we’ve been making music together since we were 15, I’m 23 now so a lot of the music comes from a different more mature place.”

Bringing together punchy basslines, synths and sampled guitar riffs, the impeccable production underlines a continuous contemplative lyrical flow which sometimes feels more like poetry than rap. By creating their very own sonic space, Stew and Gunn have also attracted a dedicated cult following with the release of their debit album ‘The Morning’ in 2014, second record ‘The Flowers In Your Room’ which came out two years later and their latest LP ‘A Walk In Water’ which dropped in 2017. All of which has led to them getting airplay on BBC Radio 1 and 1Xtra from DJ Target, Huw Stephens and Chilly Gonzales.

The pair have already sprung into action in 2019 with the release of their new EP ‘The Lakes’. Choosing to relocate to the Lake District for the recording process, they were able to find the peace needed to focus on the creative process and capture something truly special on tape.

“The surroundings and isolation were very inspiring and let us create music that was in that moment. I feel like I express myself in a way I haven’t ever been able to”. – Harvey Gunn

The separation from the city gave the pair enough breathing space to take a good hard look at their lives. This moment of clarity can be heard across the seven tracks, combining honest and reflective lyrics with sombre beats, making an intensely mature and insightful record dealing with the pressures of urban life which seems to exceed their youth. ‘The Lakes’ includes the pensive single ‘Black Water’ which has already been streamed 65k times on Spotify with an additional 3.9K on YouTube showing that they are already getting a major response.

Raring and ready to go, Frankie Stew & Harvey Gunn will be showcasing ‘The Lakes’ with a Spring tour which sees them takeover Village Underground in East London plus the revered Rock City in Nottingham during April. Grab your tickets with Gigantic right now!