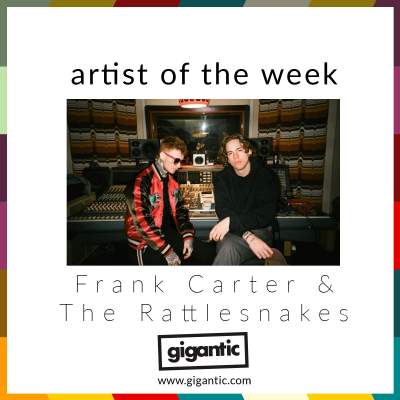 Ready to riot? Frank Carter & The Rattlesnakes released their exceptional third album ‘End Of Suffering’ earlier this year which brought the tattooed icon and his band their greatest commercial success yet, reaching #4 in the charts. This massie achivement is built on a combination of determination and dedication to their song writing plus thrilling their fans at every gig, earning a reputation for each live performance played out with such and immense passion and ferocious energy as if it were their last. With tickets for their February 2020 shows just about to be released, Gigantic makes the punk infused, blues tinged hard rockers our Artist Of The Week!

Gigantic has a pre-sale for Frank Carter & The Rattlesnakes tickets. Glasgow and London are released at 10:00 on Thursday 29/08. Tickets for Manchester are made available at 10:00 on Friday 30/08. You can find the pre-sale link HERE!

Frank Carter first rose to fame fronting Watford based hardcore punk band Gallows. Formed in 2005 and led by tattoo artist Carter, the band immediately exploded in a blaze of glory with the release of their brutal debut album 'Orchestra Of Wolves' which led to them winning the Kerrang! Award for best British Newcomer. Carter would first taste mainstream success with second Gallows album ‘Grey Britain’ which hit #4 in the charts.

Given their meteoric rise and seemingly on top of the world, it came as a great surprise that Carter was unhappy being in the band and left Gallows in 2011 citing “creative differences” as the reason for leaving. Leaving the raucous nature of his past music for something more akin to arena rock, he formed Pure Love just a few months later. They would release the album ‘Anthems’ at the beginning of 2013 before ending the project the following year with the release of ‘The Bunny’ EP.

During March of 2015, he would return to the savage sound with his new band Frank Carter & The Rattlesnakes. Some call it a supergroup, Carter teamed up with Dean Richardson (Heights) on guitar, drummer Memby Jago (Ghost of a Thousand) and producer Thomas Mitchener on bass to record their visceral debut album ‘Blossom’ which prompted a huge reaction with fans by breaking the Top 10.

The band began touring heavily, earning a fearsome reputation whilst playing frequently around the UK and the rest of Europe. Swapping Jago for Gareth Glover on drums and becoming ever more formidable, they returned to the studio to record second album ‘Modern Ruin’ which incorporated much of what they had learnt on the road and had a grand sweeping style developed by a band used to commanding a live audience. A huge hit with their followers, ‘Modern Ruin’ rose to #7 in the UK album chart and topped the Independent Album charts.

All this previous success has felt like it has been building to a single moment, then came the new album ‘End Of Suffering’ which takes inspiration for its title from the Buddhist aim of ultimate enlightenment. Created, recorded and released in just six months, their latest LP packs twelve mighty tracks of all killer no filler bangers into just forty minutes and has seen them smash into the charts at #4.

The non-stop wild ride includes massive stompers like ‘Supervillain’, ‘Kitty Sucker’ and ‘Tyrant Lizard King’ which includes a contribution from Rage Against The Machine \ Prophets Of Rage \ Atlas Underground master guitarist Tom Morello. However, it also includes the romantic uncertainty of ‘Love Games’ plus the introspective tracks ‘Anxiety’ and ‘Angel Wings’.

The highlight of ‘End Of Suffering’ is the single ‘Crowbar’. The boisterous belter is a rallying cry for individuality whilst understanding we all have to share the world, as Carter explains: “With this tune, it’s about being yourself. But it’s also about society, your family, education, even your friends and peers—they all have a different perspective of what is right and wrong in the world. The way we all live is not acceptable for other people, but the fact of the matter is no one can ever tell you how to live. The minute you start living in someone else’s rules, it’s the quickest route to unhappiness.”

Bolstered by the success, Carter and his crew were riding high this summer and gave a blistering performance under the scorching sun and Reading + Leeds 2019 which you can check out right HERE.

Gigantic is just about to release tickets for Frank Carter & The Rattlesnakes shows in February 2020 which sees them play Manchester Academy, Barrowland Ballroom at Glasgow and Alexandra Palace in London. Only limited supplies been made available by the promoters and we are getting constant enquiries from dedicated fans, eager to get their hands on their tickets so we know they are going to sell out – FAST!  Make sure you set yourself ahead of the rest by setting a personal reminder with Gigantic right now which will alert you with a text message or email (your choice!) just before they become available.

These gigs are going to be so damn good! So, make sure take plenty of pics and use #GiganticGigGoer to show them off. Plus, Gigantic is currently running a competition those truly passionate about music are going to love – if you have a truly epic photo on Facebook or Instagram then share it with us using #GiganticGigGoer to be in with the chance of winning 5 x £20 Gigantic vouchers. We will be choosing winners from our favourite pics over the next six weeks and you can find more details HERE.