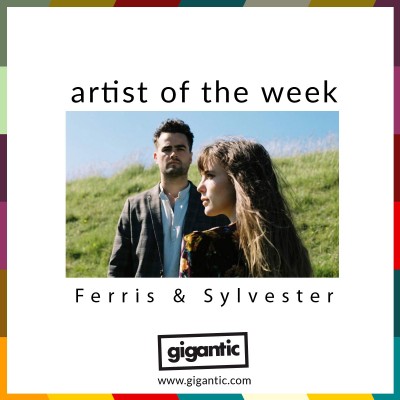 Expertly crafting their own unique blend of blues, Americana and folk; London based two-piece Ferris & Sylvester are one of the fastest growing British bands rapidly getting global attention thanks to their effecting songs and thrilling live shows. Sharing vocals and both playing guitar, their perfect partnership is leading to award-winning music and delighting critics with each new release.

In addition to the strong support and prominent airplay on BBC 6music, Ferris & Sylvester have reached wide audiences thanks to their support slots for such true greats as Eric Clapton, Robert Plant, George Ezra and Jade Bird which introduced them to audiences of many thousands who now call themselves fans.

Having made it know they are currently working on their first full length album; Ferris & Sylvester will appear at Towersey Festival before heading out on the road and playing a headline tour in November – grab your ticket with Gigantic.

Issy Ferris and Archie Sylvester met and became friends in 2016, both inspired by such energetic and innovative players and performers as Jack White, Alabama Shakes and First Aid Kit. Deciding to be definitively different, they too wanted to pioneer a sound which they could claim to be truly theirs and shunned the traditional process to record and self-produce their introductory statement at home. The DIY debut EP Made In Streatham was an immediate success upon release in 2018 and would be the first of a series of highly acclaimed singles and EPs including the upbeat “London’s Blues” and tender track “Flying Visit” which has propelled the pair on international stages and played such esteemed festivals as SXSW and Glastonbury.

The band brought out a very special sold-out Record Store Day release in 2019 of a double a-side 12” of ‘Sickness / Burning River’ as we reported HERE. Both songs were written during a trip to Iceland and highlight just what powerful songwriters they are. “Sickness” was crafted with the aid of producer Michael Rendall (Pink Floyd, Paul McCartney, Echo and The Bunnymen) and amassed a truly impressive two million streams on Spotify in the first two months of release.

Despite the recent turbulent times, the past two years have been a breakthrough period for the duo who began to enjoy the recognition they deserve. They have won both Emerging Artist Of The Year at the UK Americana Awards 2020 and this year secure a further nomination for UK Song Of The Year with “I Should Be On A Train”, the explosive title song from their latest studio EP which deals with themes of adversity.

“The world is adapting to a new reality, and we’ve been determined to adapt with it and get creative. It can be difficult in isolation to know how to move forward. People are lonely, overwhelmed and yearning to connect. We were busy writing for future projects, trying to map out the next chapters. But we decided it was more important to give what we can now. All we know is we are happiest when sharing our music and we hope this brings joy to people.”

Continuing a big year for the band, the pair have dropped their five-track live EP Live At Real World Studios which includes passionate performances of the best loved songs including “I Should Be On A Train”, “Sickness” and “Knock You Down”. Ferris & Sylvester have enthused about returning to the studio very soon with the intention to write and record their eagerly awaited debut album. No doubt a monumental record for British Americana, they have also announced an Autumn tour following their appearance at Towersey Festival where you might just get to hear them try out new material on audiences for the first time. Tickets selling with Gigantic, book yours before they go!