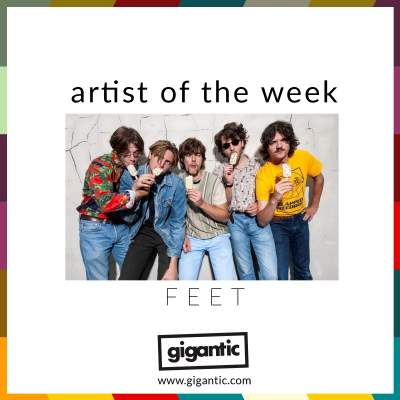 Standing head and shoulders above the rest of the bland bands, FEET have proven to be one of the most compelling breakthrough bands of recent years thanks to their innovative take on indie rock which has see the critics come running to shower them with praise. Originally taking a post punk stance, they have continued to develop and last year saw the release of their joyous debut album ‘What’s Inside Is More Than Just Ham’ which cemented their status as being at the forefront of new generation of British bands.

While it may be customary for bands to form in whilst at university, relocating to a retirement village via a short stay in a Bedfordshire barnyard is not. But then, what else would you expect from the FEET; the band who are quickly growing a grassroots fanbase owing to their quirky charm. The friends met at a Coventry Uni music society social during 2016 and decided to start the band owing to their mutual love of post punk.

Looking to find their own space, both literally and sonically, whilst full of youthful exuberance, the lads would first find themselves getting up the noses of East countryfolk before terrifying the poor Portsmouth pensioners who were not best pleased with the rowdy bunch who arriving in their quiet little village.

“Nobody liked us because we were really loud. Everyone was telling us we were disrespectful and ruining their community. I’m sure we were talked about at a lot of book clubs.”

Their choices of where stay relocate might be unorthodox, but that’s certainly in keeping with a band that was keen to keep innovation at their core. A year after starting, they put out their first singles ‘Petty Thieving’ and ‘Backseat Driver’ which, loaded with pop hooks and a confident delivery, marked them out at an early stage. They were spotted by former Maccabee Felix White who signed them to his independent label Yala Records – the perfect platform to both release their music and encourage them to continue to push their sound forward and develop.

To further assist with this growth, Cam Blackwood who has had massive successes with Jamie T, London Grammar and George Ezra was enlisted to join them in the studio to create what would become their debut album; ‘What’s Inside Is More Than Just Ham’. Their first full length record would not be an unrecognisable departure from their earlier releases, but would incorporate much brighter tones which would prompt many to comment on how it recalls the 90’s Britpop heyday – but still with an added element of experimentalising. Mixed by Alan Moulder, famed for having worked with such legendary pioneering acts as U2, My Bloody Valentine and The Cure, and released on their own label Clapped Hands; FEET soon found themselves being played by Annie Mac, Huw Stephens and Steve Lamacq who were all eagerly playing singles ‘Dog Walking’, ‘Ad Blue’, ‘Outer Rim’ and a reworked version of ‘Petty Thieving’ on their radio shows.

Having previously sold out their last UK and Ireland tour, we are very excited to be able to offer you tickets for FEET shows later in the year – but make sure you grab yours before they all sell out!