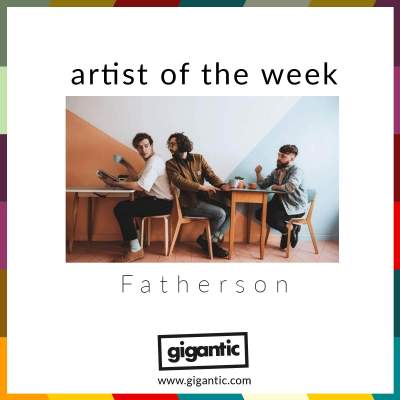 Fatherson are the indie rock three-piece which continue to inspire as they develop. Forming in their teens, the precautions talent of Greg Walkinshaw (drums), Ross Leighton (guitar/vocals) and Marc Strain (bass) has shone through and seen the release of three incredible records which have each been nominated for Scottish Album Of The Year, including their debut ‘I Am An Island’, awesome second return ‘Open Book’ and their essential most recent LP ‘Sum Of All Your Parts’ which reveals a band with so much left to give.

The school friends from Kilmarnock formed Fatherson in 2010, wanting to develop their own style of alt-rock. The teenagers hard work and impressive young talent built into a surging momentum and were soon selling out 600 capacity venues on their own steam before even releasing an album which attracted attention from the likes of the late acclaimed songwriter Scott Hutchinson of Frightened Rabbit who eagerly spread their name.

Consequently, the expectation on the band was high and continue to grow which would have been enough to buckle any lesser musicians. Fortunately, Fatherson negated any of these pressures and succeeded in creating a brooding masterpiece debut album ‘I Am An Island’ which dropped in 2014 and is regarded as a truly classic first full length Scottish record.

Whilst many incur the wrath of the difficult second album syndrome after receiving so much initial hype, Fatherson had no such trouble and in fact enjoyed even greater success when they signed with Sony Imprint Easy Life Records and brought out their sophomore LP ‘Open Book’ in 2016 which shot straight to No. 2 in the Scottish charts.

Having well and truly established themselves, they now went on to play support for such luminaries as Kings OF Leon, Biffy Clyro and Entire Shikari. A real career highlight was marked with selling out the entirety of Glasgow Barrowlands where they played a now legendary gig plus they packed out a tent at T in the Park with a capacity of 12,000.

Having more than proved themselves, they were bumped up Sony and released their latest LP ‘Sum Of All Your Parts’ in the Autumn of 2018. It saw the lads take a more overtly positive direction which differed from their previous pensive sound and this added anthemic direction appealed to both critics and fans.

“We wanted to have fun on this record and make music that we really love. I think we’ve done it more on this album than on anything else. I really hope that comes through, because that was what it was all about.” – Ross Leighton

A real creative high for the band, they retuned to four of the tracks at the beginning of this year which they re-imagined and remix for an EP.

Fatherson will finish the year with a huge tour which takes them around the UK plus sees them appear at 2Q Festival in Lincoln and Gigantic is very proud to be able to offer you tickets – grab yours right now!