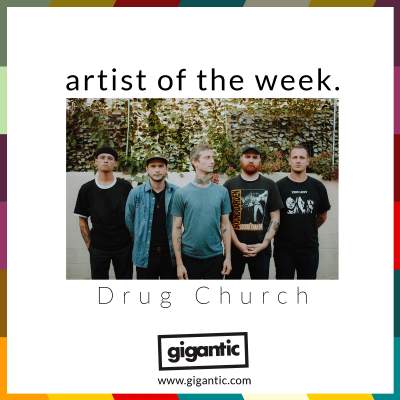 Bringing together the unrelenting strength of hardcore punk, pop melodies and awesome alternative rock hooks, Drug Church are a glorious mash up of influences from Albany, New York and are ready to storm the UK in promotion of their new album ‘Cheer’.

Formed by Patrick Kindlon of renowned post-hardcore group Self Defence Family in 2011, it was clear from the outset that Drug Church would not merely be some sort of vanity side project as proved by the three track Demo released online. Their creative output would be relentless, releasing several EPs plus their debut album ‘Paul Walker’ which came out in 2013, followed two years later by their second LP ‘Hit Your Head’.

Combing the raw power of hardcore punk with various genres of alternative rock to tell anecdotes about the trials of working class life, Drug Church managed to burst out of New York and find fans across the US and even reach a truly international audience.

Last year saw them return with their third album ‘Cheer’ in November. Lauded by the music press with Drowned in Sound describing them as “one of the most exciting bands around in a genre that doesn’t often do much experimentation or progression” and Kerrang! making it their album of the week; ‘Cheer’ is a 28 minute rampage of a band at their most confident, willing to develop their sound and focus their fury into one of the best – yet sadly overlooked – punk rock albums of 2018.

Applying elements of grunge, pop punk and a delving deep into radio friendly melodies, Drug Church were keen to breakout of the confines of what many in the hardcore circles consider acceptable;

“The thing about hardcore is that once they see you as not being hardcore, you’re never getting invited back. So, I think Drug Church is probably not a hardcore band and I’m okay with that. This is advice for people in bands who think they’ve got to chase credibility: that shit is bullshit. I see a lot of bands breaking their necks trying to get accepted by people who are going to die broke and unhappy. If that’s where you find yourself, that’s cool – that’s your lane. After the age of 23, I never really concerned myself with that.” – Patrick Kindlon

The result is a record that is packed with high points. ‘Strong References’ sounds like a PIXIES song on steroids – blending surf rock with a brutal chorus line, ‘Unlicensed Hall Monitor’ is jubilant in its attack on the scum rising to the top and just try not to lose your shit to the satisfying grind of ‘Avoidrama’.