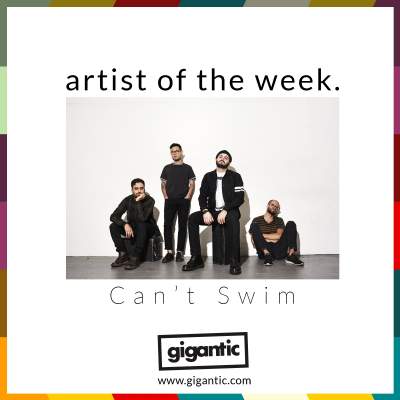 Dense with emotional weight and insightful lyrics yet light with rousing pop rock riffs which speed the listener along, Can’t Swim are the awesome band from New Jersey you need to know. After first impressing with debut album ‘Fail You Again’, last year saw them return with their second full length record ‘This Too Won’t Pass’ which showed a whole new level of intensity and is winning them a devoted following here in the UK.

Chris LoPorto’s first steps into live music saw him trying to be a drummer. Inspired by his Uncle Mike who played drums for local bands The Piss and The Brutally Familiar which enjoyed some success, even touring with Bad Brains and Gorilla Biscuits, LoPorto also chose to pick up the sticks. Although he would also join in with the local punk circuit, he would become frustrated by both the way punk would typically accept low production values and the limitations on his ability to express himself sat at the back behind the kit.

Recruiting his close friends, LoPorto formed Can’t Swim in 2015. Adopting a style that is somewhere between emo and pop punk whilst retaining an indie rock edge, the new band were quick to impress and by the end of the year were signed to Pure Noise Records which whom they still remain and released their first EP ‘Death Deserves A Name’ the following year.

In 2017, their rise continued with the release of debut album ‘Fail You Again’. After grabbing attention with the single ‘Stranger’, the critics were eager to hear the rest of the record and were not disappointed. ‘Fail You Again’ was twelve pained yet somehow uplifting punk orientated tracks.

‘Sometimes You Meet The Right People At The Wrong Times’

Can’t Swim first announced their second album ‘This Too Won’t Pass’ with the release of the single ‘My Queen’ which singer Chris LoPorto describes as a classic breakup song. It was the first taste of a record which would be fraught with LoPorto insecurities and the struggle to deal with encroaching problems which seem to fester and get worse.

“Things aren’t going to get better. Not everything heals with time and problems don’t just go away. Problems haunt you, infect you, and in time become a part of who you are. You might find ways to distract yourself or try and forget but every time you look in the mirror you’ll only see reminders of what you hate. Evil surrounds us and in time, becomes a part of who we are. Let this band be a reminder of that.”

Despite the themes of anxiety throughout their second LP, Can’t Swim are able to channel this nervous energy into an exploration of unease and ultimately a satisfying cathartic release of tension through melodic vocals and neatly released guitar riffs combined to make expertly crafted songs which hold an almost cinematic quality.

Can’t Swim now head to the UK for a tour to promote their sensational second album. Kicking off at the beginning of next month, they will be joined by emotionally charged band Save Face who are also from New Jersey and Brummy pop punks Coat to Coast. Tickets are on sale with Gigantic right now!