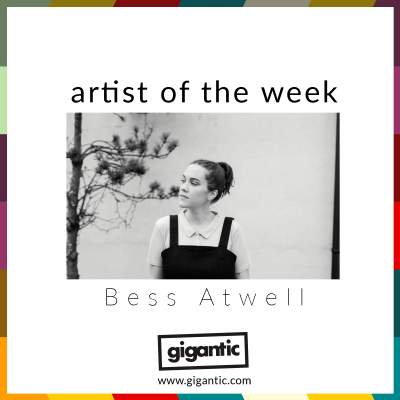 Exploring the human condition through poetic lyrics plus textured, ethereal and expressive melody: Bess Atwell’s modern take on folk has marked her as vital listening as proved on debut album ‘Hold Your Mind’ and her newly released EP ‘Big Blue’. Her incredible song writing ability is all the more impressive given her young age and she is regarded as many as being at the front of the new generation of British hopeful stars.

Bess Hildick-Smith grew up as part of an innovative family with three siblings, surrounded by the idyllic Cambridgeshire countryside in a small village close to the creative hub of Brighton. Despite starting her studies at Falmouth University, she felt like she was moving in the wrong direction and in 2015 made the brave decision to withdraw from education and relocated to London to pursue her passion for music instead.

Performing on her own under her new stage name Bess Atwell, she quickly attracted attention for her unique and modern take on traditional folk styles. Around the same time she broke into the festival circuit, she also received label interest and in little more than a year she had recorded and released debut album ‘Hold Your Mind’.

“The recording of the album was a massive learning curve. It was weird for me to be, ultimately, in charge of a group of talented, trained musicians (the band I recorded with) and it took a while to embrace the responsibility for the sound of the album. We recorded most of the album in the studio in London, with the band, and those sessions were a lot of fun. My producer, Michael Smith, and I also had a few sessions out in the countryside where I live, when we simplified things and reconnected with the album sonically.”

A huge success, ‘Hold Your Mind’ was highly regarded by the critics with The Independent describing her as "a promising folk poet of suppression and inner anxiety". However, not one to rest on her laurels, Atwell felt the need to progress and expand her sound. Deciding her music and live performances could any develop with the assistance of others, she began recruiting collaborators and what was a solo project is now backed by her very own band.

This year has seen Atwell return with her thoughtful EP ‘Big Blue’. Prior to its recording during the summer months of last year with producer Giles Barrett (Goat Girl, John Grant, Johnny Flynn) at Soup Studios in East London, Atwell returned home with her band to Brighton to work on the arrangements to ensure they were ready to record an ambitious five tracks in just four days. Though somewhat a gamble, the creative stretch paid off as she was able to create a compelling record which sounds confident, considered and paced despite being taped at breakneck speed.

"I wanted to release a small project which would hopefully represent a refinement in my sound. The 5 tracks explore conflicting themes on identity, romanticism and reality"

Including on ‘Big Blue’ is the mesmerising single ‘Swimming Pool’ and the delicate strength of ‘Grace’, both of which were soon playlisted by BBC 6 Music highlighting a songwriter on the rise. Make sure you grab your ticket for Bess Atwell’s October tour, on sale with Gigantic right now!