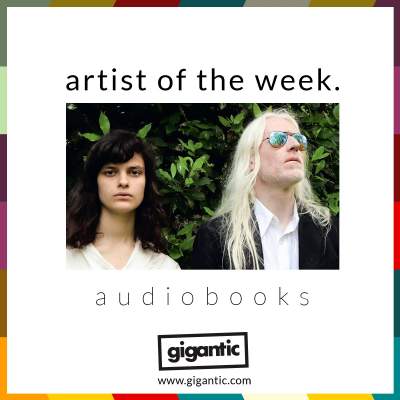 Sometimes something is so wrong it’s right. A 21-year-old art student from Wimbledon and a producer credited with recording the very first acid house record in Welsh right at the start of the 90’s might sound like an unlikely combination, but arty synth pop pairing Evangeline Ling and David Wrench are audiobooks – the most in demand act of right now!

Immediately throwing themselves in unfettered record sessions, they have unleashed their creative powers to create their utterly compulsive sound combing additive beats with stream of conscious lyrics that feels somewhere between a club classic and a sneaking a peek into someone’s personal diary.

Having randomly met at a party, Lang began showing Wrench isolated semi-finished stories saved as notes and text messages on her phone. Seeing the potential for these fragments to become lyrics, Wrench invited her to his studio and the two began the process of starting what would become audiobooks.

“I’d found myself writing these odd stories as text messages on my phone. They were too short to be proper stories… they were fragments. I’d told David about them when we met and he said, “’Come into the studio and let’s put them to music.’” The next day, we started making music.” – Evangeline Ling

Finding that they worked well as a unit, they both became gripped by the compulsive need to create together and Lang found it irresistible to stay away.

“The second time Evangeline turned up at the studio she arrived in her pyjamas. She’d come all the way from Wimbledon to east London in a pair of Batman pyjamas.” – David Wrench

“I hadn’t slept all night, I’d just had this crazy adrenaline. I knew we were doing something really special and I couldn’t wait to get there. I didn’t have any clean clothes so I just thought, ‘Sod this, I’ve got to go’.” – Evangeline Ling

‘Dance Your Life Away’

Sometimes excitable, other times demure; Lang’s enigmatic vocals tells of the small stories of London life that grow together to become the many tales of living in the capital city that wind around the sounds made by Wrench which range from the brooding to the hyperkinetic as first exhibited of their ‘Gothenburg’ EP.

audiobooks have signed to Heavenly Records, the indispensable indie label known for being the birthplace of the most innovative acts who often rise to revolutionise the current music landscape. So, its no surprise that Wrench and Ling would find a home at Heavenly for the release of debut album ‘Now! (in a minute)’.

Their first full length record caused a storm amongst critics and includes the hypnotic electronic warble of ‘Mother Hen’ which feels like they are casting a post-modern witches spell, the solid grooves on ‘Hot Salt’ and ‘Dance Your Life Away’ plus ‘Womanly Blood’ which features percussive contributions from Stella Mozgawa, drummer of famed psyche rock and dream pop sensations Warpaint.

Having lit a fire under the music press who are driven wild by ‘Now! (in a minute)’, everyone is clamouring to see the pair perform live. Gigantic is very pleased to be able to offer you tickets to see audiobooks when they kick off their promotional tour in Spring.