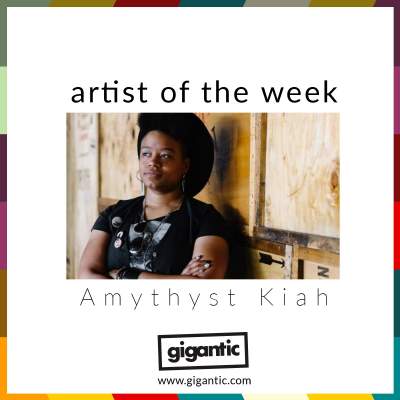 An inspiring multi-instrumental musician, Kiah is a proficient player of the banjo and acoustic guitar which she often swaps between using at her live shows – playing either on her own or with the backing of her full band. She reaches deep into the past, drawing her sound from the rich histories of blues, folk and country whilst expressing her own unique personality by finding a new direction for each genre and amalgamating them with alternative rock.

This summer sees Amythyst Kiah fly to our shores to tour the UK. Make sure you grab your ticket with Gigantic today!

“Her razor-sharp guitar picking alone guarantees her a place among blues masters, but it’s her deep-hued voice that can change on a dime from brushed steel to melted toffee that commands attention.” —The New York Times

Southern singer Amythyst Kiah was born in the Tennessee city of Chattanooga before studying and graduating at the East Tennessee State University and now lives in thriving Johnson City. In 2013, she released her powerful album ‘Dig’ which perfectly captures the magic of her live shows allowing her to show off her exceptional skill on guitar and hypnotic voice. The album ends with her remarkable reworking of Radiohead’s ‘Fake Plastic Trees’.

This year has seen Kiah team up with fellow blues, folk and Americana players Leyla McCalla, Rhiannon Giddens and Allison Russell from Birds Of Chicago to complete supergroup and record their album ‘Songs of Our Native Daughters’, the title referencing a collection of essays by black writer, playwright and activist James Baldwin. Produced by Grammy Award winner Dirk Powel, the accomplished musicians excelled themselves across 13 songs which address issues of racism, sexism and slavery in the US including a cover of Bob Marley’s ‘Slave Driver’. ‘Songs of Our Native Daughters’ was critically acclaimed and saw them nominated for Duo/Group Of The Year at the illustrious Americana Honors & Awards.

No stranger to the UK, Amythyst Kiah has proved a hit on the festival circuit and impressed audiences at Cambridge Folk Festival,Celtic Connections, Southern Fried Festival, , Edinburgh Jazz & Blues Festival, and the  SummerTyne Americana Festival. She now makes her welcome return to play headline dates over August. Make sure you grab your ticket before they go!