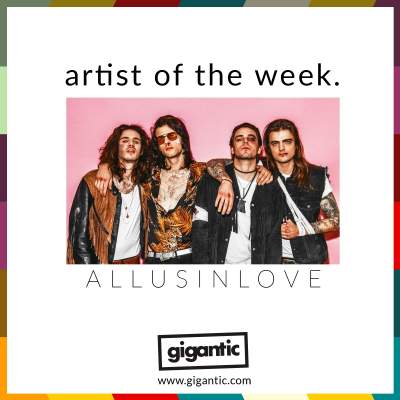 Having just been named by Huw Stephens on his BBC Introducing show as one of his “Ones To Watch” in 2019, the excitement surrounding West Yorkshire based psychedelic tinged rockers ALLUSINLOVE is certainly building. Their members include Connor Fisher-Atack (drums), Andrey Pavlovic (guitar), Jason Moules (vocals) and Jemal Beau Malki (bass).

Previously working as allusondrugs, the band formed in Castleford during 2012 and through relentless touring earned a reputation for the fierce performances which built a solid fanbase around the UK whilst attracting the attention of such esteemed institutions as NME, Kerrang! and Q Magazine who eagerly enthused about their trippy take on hard rock.

The lads finished off 2018 by dropping their previous name in favour of their new tag before playing four residency nights in the legendary Leeds venue Brudenell Social Club over November and December, with tickets given away to their most diehard fans.

Last year also saw the release of their rampant rocking self-titled four track EP under their new moniker which features the single ‘All Good People’, which is four minutes and forty-four seconds and unabashed decadent blues rock, as the lead track to truly cement their change in title. What follows is an accomplished foray into varying degrees of anthemic rock, with the gorgeous vocal harmonies and massive lead guitar on ‘Full Circle’ giving all the signs of being their next single, ‘Bad Girls’ being a satisfyingly dark stomper and rising to an almighty climax with electronica informed song ‘Love I Need A Friend’ as the closer.

ALLUSINLOVE now look to a bright future which sees them kick off the new year with an extensive tour throughout the whole of February. Giving every sign of being THE breakthrough band of 2019, make sure you catch them next month just as they are about to explode. Get your tickets with Gigantic right now!