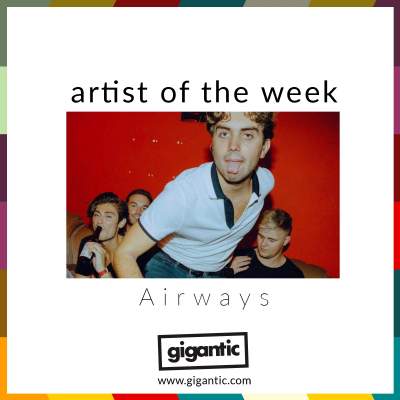 Look out because Airways are a band on a mission! Bringing together big beats and huge riffs, they are ready to blast off and take over the world! This fresh take on indie rock combines the attitude of guitar music with buzz of dance music making them one of the most exciting new British acts of this generation.

Formed in 2015 and based in Peterborough, Airways first started to demand attention with the release of their single ‘Reckless Tongue’. Later featuring on their ‘Starting To Spin’ EP, the song was brimming with confidence and revealed to the world a band that was ready for big things. Capturing a massive amount of online attention, it led to them securing major support slots for the likes of The Hunna, Sunset Sons, Nothing But Thieves and Razorlight plus propelling them onto the festival circuit.

‘Starting To Spin’ has now hit an incredible 7 million streams on Spotify, with more new fans discovering Airways every day.

“We’re from nowhere. It’s strange to think we might be getting somewhere.” – Jake Daniels

Eager to reach more listeners, they began to look for gigs further afield. In March 2017, Airways had a short US trip booked and had their VISAs declined just three short days before they were due to fly. In anger, they retaliated by writing the banging single ‘Alien’.

“We were due to play in the US and Trump’s tighter border control meant getting a visa wasn’t as easy as before. The trip had to be cancelled at the last minute. We were furious, and it made us think about being la-belled as ‘undesirable’ in a variety of situations!”

‘Alien’ has grown to become one of their most popular songs, wracking up near 5.5 million streams on Spotify and a further 1K plays on YouTube, proving that you can’t keep a good band down!

This year has already seen a flurry of activity for the lads. Shortly after returning from their European tour playing support for Deaf Havana, they headed into the studio to record their accomplished single ‘Blue Gasoline’. Drawing on influences of both Britpop and hip hop, it shows a band on their way to the top.

“We got together to play music, and that means anything we like. We’ve got support on the indie circuit so far, but we have no intention of staying in one lane. The whole concept of being in a band seemed pretty impossible when we started. We want it to grow to a place where Airways means an experience, a great night among great people, not just one sound or one way of having fun. It’s still small now, but we have our sights set on much bigger things.”

They also promoted the single with a killer live version that you can see on YouTube right now!

Released just a month ago, their latest offering is the awesome single ‘Trampoline’. Dealing with issues of everyday anxiety and yet another example of why 2019 is going to be a major turning point of the Peterborough crew as they break into the mainstream.

Airways will be appearing at Beyond The Woods, a vital music festival hidden away from the world which is the perfect place to discover your new favourite act at the intimate setting of Stourton Estates in Lincoln. Later in the year, you can catch them on their very own Autumn tour, tickets on sale with Gigantic right now.

Airways Tickets Beyond the Woods Tickets