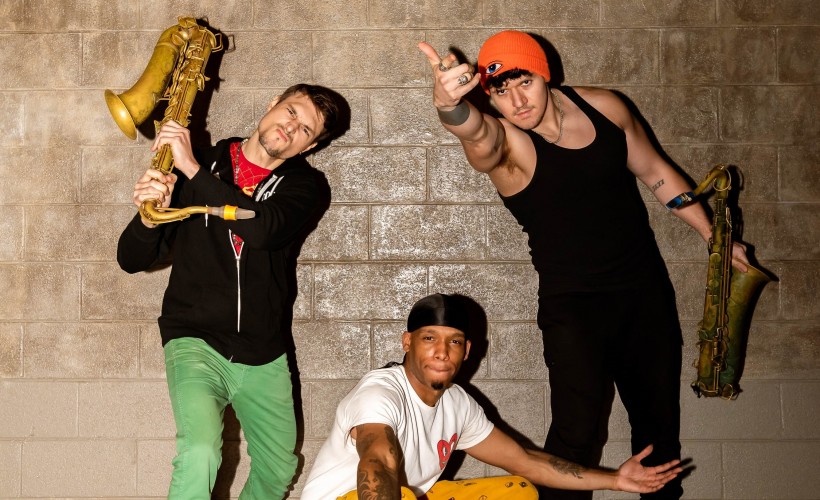 Moon Hooch captured the imaginations of thousands with its infamous stints busking on subway platforms and elsewhere in New York City: two sax players and a drummer whipping up furious, impromptu raves. This happened with such regularity at the Bedford Ave station in Williamsburg, Brooklyn, that the band was banned from playing there by the NYPD. The trio's subsequent tours with They Might Be Giants, Lotus, Mike Doughty, and Galactic as well as on their own have only broadened the band's appeal. Wherever Moon Hooch plays, a dance party soon follows.
Hornblow Recordings and Palmetto Records are now proud to release Moon Hooch's second album, This Is Cave Music, on Sept 16, 2014. The title refers to the term Moon Hooch coined to describe their unique sound: it's like house music, but more primitive and jagged and raw. Horn players Mike Wilbur and Wenzl McGowen do this by utilizing unique tonguing methods, or adding objects -- cardboard or PVC tubes, traffic cones, whatever's handy -- to the bells of their horns to alter their sound. Not to be outdone, drummer James Muschler gets swelling, shimmering sounds from his cymbals, and covers the head of his snare with a stack of splash cymbals to emulate the sound of a Roland TR-808 drum machine's clap.
While their self-titled first album, which cracked the top 10 of Billboard's Jazz Albums chart, approximated the band's acoustic approach to dance music, This Is Cave Music takes their cave music hybrid further into electronic and pop music realms with synthesizers, post-production work, and even singing added to the mix. "We aren't trying to do it for the sake of reaching a wider audience," McGowen points out. "We are doing it because it's where our passion has evolved to. This album is a culmination of that."

Your ultimate guide to the best new music!

That's all we have for Moon Hooch! Check out their upcoming shows