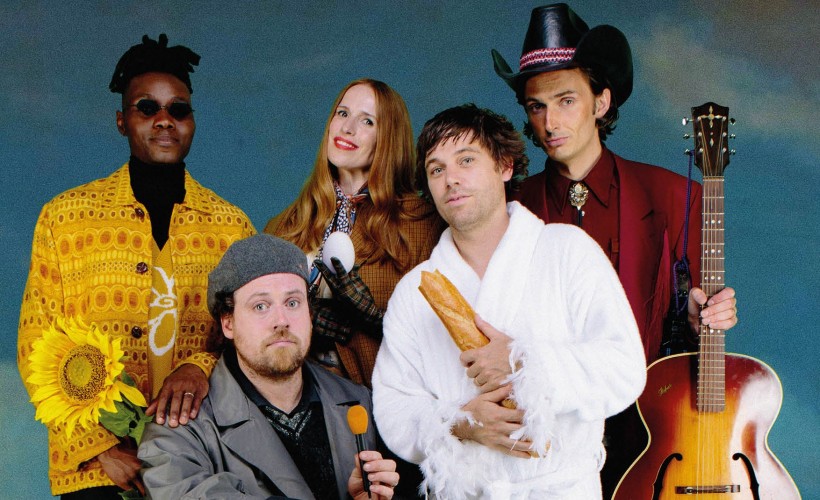 Metronomy were excellent. A fantastic show. Looked so at ease. One of the best gigs I've seen at the Roundhouse.

To celebrate, the band are re-issuing their much-loved album with six previously unreleased bonus tracks available for fans to stream and buy on 30th April 2021 via Because Music. The reissue will be available on limited edition and numbered heavyweight 180g vinyl with etched fantascope on side D. To mark the announcement, the Joseph Mount-fronted indie pop collective today have shared previously unheard bonus track ‘Picking Up For You’, listen now.

Of the anniversary, Joe says “My first apartment in Paris had an almost comically perfect view of Montmartre and the Sacré-C-ur Basilica. In the shadow of the Sacré Coeur, with Barbès and the hill of Montmartre as a backdrop, I sat idly one day and wrote what would become one of Metronomy’s most popular songs.

I was tinkering around with one of Marion’s keyboards and after a short while came up with the bit that gets stuck in your head; the der-de-der-der bit. I played around with it a little, hit a wall and thought ‘it’s not really Metronomy, is it’. Four months later, we finished recording The Look at the Smokehouse in London. We quite liked it, but that was about it. Then I distinctly remember the journalist Dave Simpson asking me about the song after we performed it for the first time at the Leeds Cockpit in January 2011. That was probably the moment I realised it had something about it.

I still don’t know precisely what that something is, but when we perform The Look live and I hear thousands of people chanting the bit that gets stuck in your head back at me, der-de-der-der, it often brings a tear to my eye. It really is amazing what that seaside song and this whole album has done for Metronomy.”

A love letter to the stretch of coast a stone's throw from where Joe grew up, The English Riviera marked a breakout moment in the band’s history that would lead them to global success and see them constantly developing their sound for a decade to come. The band are currently working on what will be their seventh album, due for release next year.

Metronomy’s biggest album to date, The English Riviera was nominated for the Mercury Prize, is certified Gold in the UK and platinum in France, and upon release was met with wide scale critical acclaim: ranked as NME’s #2 album of the year (“a deep sea of ideas and imagination”), NYLON’s #2, Uncut’s #3, Mixmag’s #4, and #7 by The Guardian (“an assured, beguiling album”) among many other end of year lists. The English Riviera’s standout tracks ‘The Look’ and ‘The Bay’ remain Metronomy’s biggest and best recognised songs to date.

Metronomy is the brain-child of disillusioned drummer Joseph Mount, Metronomy are an alternative electronica group producing funk-infused beats, android-esque vocals and highly addictive bass-lines. Mount now leads on vocals, guitar plus keys and is joined by drummer Anna Prior, saxophonist and guitarist Oscar Cash plus Gbenga Adelekan on bass.

After drumming in a number of bands, Mount began experimenting with electronic music on computers. Relocating to Brighton he developed an interest in DJ’ing where he was approached to release an album of his material. The debut album release Pip Paine (Pay The £5000) You Owe came out in 2006 and was entirely his own solo work. However, the need to play the material live lead to the formation of the band.

Second album Nights Out came in 2008 and saw the band having input, but with Mount at the helm. It became an essential record for those in the know. However, their real break would come in 2011 with album The English Riviera after benefitting from being nominated for that year's Mercury Prize.

They followed this success with forth album Love Letters in 2014 which featured the hug single I'm Aquarius. In an interview with the NME, front-man revealed Love Letters was inspired by the birth of his first child, alongside musical legends Sly and the Family Stone and The Zombies. He also detailed his surge in confidence whilst creating the album. In 2016, they dropped their LP Summer 08. Similarly, to their debut, it was recorded entirely by Mount and enjoys commercial success.

“ It's weird, I think I've learnt the difference between being confident in an egotistical way and being confident in what you do. I was getting embarrassed and finding it difficult to sing things that I'd written without cringing." - Joe Mount

Metronomy concert tickets are always in massive demand so make sure you book early as they will go. Stick with Gigantic for the best experience of buying the gig tickets you need.

Gigantic has your tickets for Metronomy