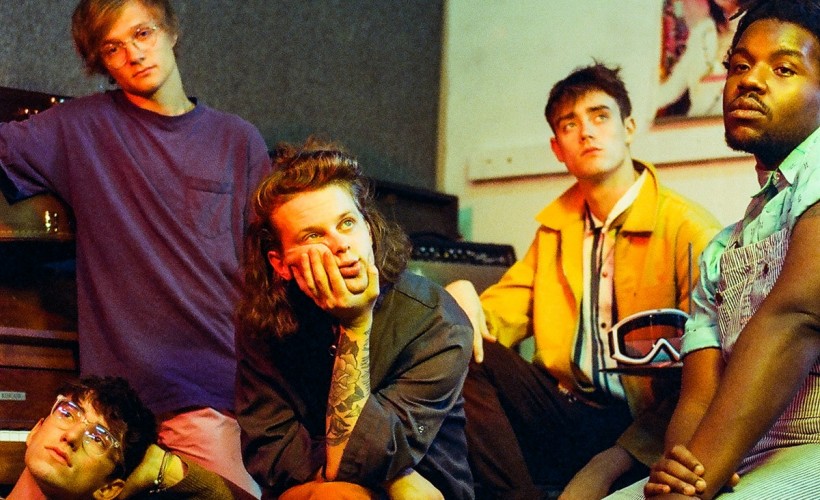 Hippo Campus were cool looking with great songs and can they play , oh yes with such great love and joy. They had the very young, mobile in hand audience who had such love for them in their hands. Their was even a minor light show in the room at one point and this had they young crowd record record like a a baby discovering snow for the first time!dated.
The two support bands were very poor, dull and dated. Hippo Campus is one of the best gigs i was ever at.

The performance was unforgettable as we were very near the front. The band was lively and outstanding. The room for the size of the audience, which was good because when performances are cramped it ruins the whole experience. I would definitely go back again.

Hippo Campus are championed by the likes of NPR, Noisey, DIY, Consequence Of Sound, Mistajam, Huw Stephens, Greg James, Steve Lamacq and more, whilst sitting at well over 3,000,000 spins on Spotify.

See Hippo Campus play The Deaf Institute at Manchester and The Garage in London in support of new album Good Dog, Bad Dream.

Arriving hot on the heels of the band’s acclaimed ‘Good Dog, Bad Dream’ EP, ‘Boys’ marks the first reveal from the Minnesotan quintet’s upcoming third record - their strongest and most complete work yet - a freshly-inked portrait excavating young adulthood and identity and, more importantly, how that personal identity fits into a larger camaraderie.

Detailing their latest effort, frontman Jake Luppen explained: “It was about this party I went to where I had all these crazy experiences and then woke up feeling like, “I need to change my life right now,” the next day I went to New York and came back, hung out with our new manager, and felt slightly better. It's like that feeling when you're drunk and then you wake up hungover and you hate yourself.

It’s also about exploring sexuality, and the elusiveness of it. I’ve always felt that sexual preference is something that exists beyond the binary. At different points in your life you feel different ways, and that’s ok. In this track we’re kind of comparing that journey to our first trips to NY. It’s this huge place that is always moving past us while we’re trying to grab a hold of it.”

With widespread praise across the press landscape (DIY, Dork, The Line Of Best Fit, The Independent, Gigwise, Rolling Stone, Billboard, Consequence of Sound), alongside becoming stalwarts on the BBC Radio 1 airwaves (Jack Saunders, Annie Mac), Hippo Campus are certainly making all the right noises ahead of their return to the road, with a full tour earmarked around the album’s February 2022 release.
Produced by Caleb Hinz (Baby Boys, Samia, Miloe), Hippo Campus’ ‘Boys’ is out October 19th via Grand Jury and will be available on all digital platforms.

Hippo Campus tickets are on sale with Gigantic!