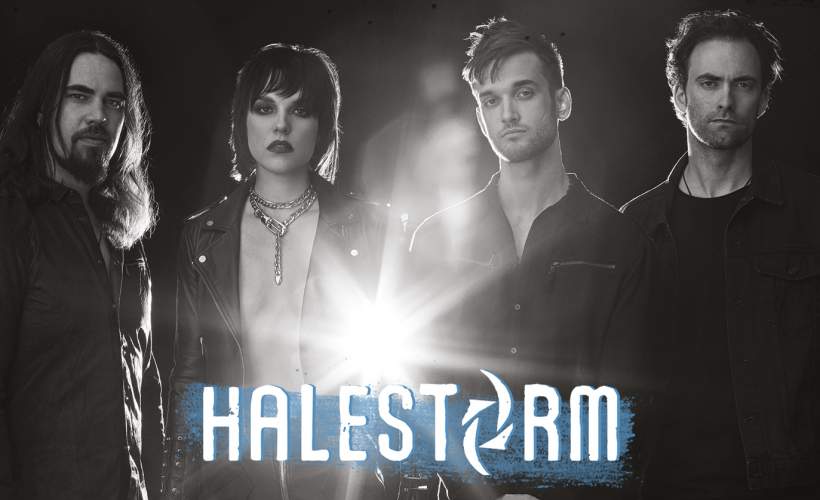 Extremely happy with the concert and the organisers. Everything was just perfect

"Best of the year"

I have been to a few gigs this year but for sheer energy, vocal performance and power then Halestorm was my favourite. Thank you for a fabulous evening to them. They completely rocked and ticked all boxes.

"Felt connected to each band!!!"

All three of the bands last night are very important to me, ‘In This Moment’ especially, as they are my favourite band; ever. I bought the tickets as a birthday present to myself a year in advance the moment they were available, and took my friend with me. We both had the most amazing night! I was dead centre about three rows back and could see everything, nearly passed out with excitement when ‘Maria Brink’ came on! My friend was surprised I knew every line to every song from each band, what can I say I’m a massive fan! 🙂

Halestorm is an American rock band from Red Lion, Pennsylvania. The group's self-titled debut album was released on April 28, 2009, through Atlantic Records, while their second album The Strange Case Of... was released on April 10, 2012. Siblings Lzzy and Arejay Hale have been creating their own music since they were 13 and 10 years old respectively, and have become known for their non-stop touring, even performing up to 250 shows per year.

Fans are all very excited to get their hands on Halestorm tickets, but as the word spreads the demand grows so book yours before they all go. Gigantic makes placing your gig tickets order easy by enabling access to our site 24/7 meaning you can have a relaxed experience whilst at home or even out and about using your smartphone, tablet or computer.

Leading a busy life, it is easy to forget when your favourite gig tickets are going on sale and miss out. So, set a personal reminder with Gigantic and then you will be alerted with a text message or an email just prior to their release at 12:00 on Friday 9th of March.

Siblings Elizabeth and Arejay Hale, the core members of the hard rock band Halestorm, formed the group in late 1997 near York, Pennsylvania, with Arejay on drums and Elizabeth on vocals and keyboard. Wanting to expand their sound, the duo invited their father, Roger, to play bass for Halestorm. Soon after their first professional gig in 1998 at the Blue Mountain Coffee House in Hershey, Pennsylvania, the band added various guitar players and released an EP, 1999's (Don't Mess with The) Time Man. More lineup changes occurred, but Halestorm finally solidified with Elizabeth (who was by then going by Lzzy) on vocals and guitar, Josh Smith on bass, Arejay on drums, and Joe Hottinger on guitar. The band caught the attention of producer David Ivory as well as Atlantic Records -- both were involved in the band's major-label debut, 2006's One and Done, a five-song EP recorded live at a show in Philadelphia.

They would finally make their full-length studio debut in 2009 with the eponymous Halestorm, all the while maintaining a rigorous touring schedule that would see them playing upwards of 250 shows a year. The following year, Halestorm released the concert recording Live in Philly 2010, and Reanimate: The Covers EP appeared in 2011, featuring the band's takes on songs by Heart, Guns N' Roses, and Lady Gaga. Their sophomore album, The Strange Case Of..., followed in 2012, and the single "Love Bites (So Do I)" earned the group a Grammy Award for Best Hard Rock/Metal Performance. Reanimate 2.0 was released in 2013, this time finding the band tackling Fleetwood Mac, Daft Punk, and Marilyn Manson.

The band's eclectic third studio long-player, the Jay Joyce-produced Into the Wild Life, was released in April 2015, and was preceded by the single "Apocalyptic." The live EP Into the Wild Live: Chicago arrived in 2016, followed in early 2017 by Reanimate 3.0, which featured covers of songs by Whitesnake, Metallica, and Soundgarden.

As there are only limited supplies of Halestorm concert tickets being put on sale by the event organisers, we really do urge you to act quickly and book yours before they are all gone. Last year saw Gigantic take home Nottingham Post’s their illustrious ‘Retail Business of the Year 2017’ award, and with even bigger things planned for the new year you know we are the very best place to come whenever you are planning your big night out!