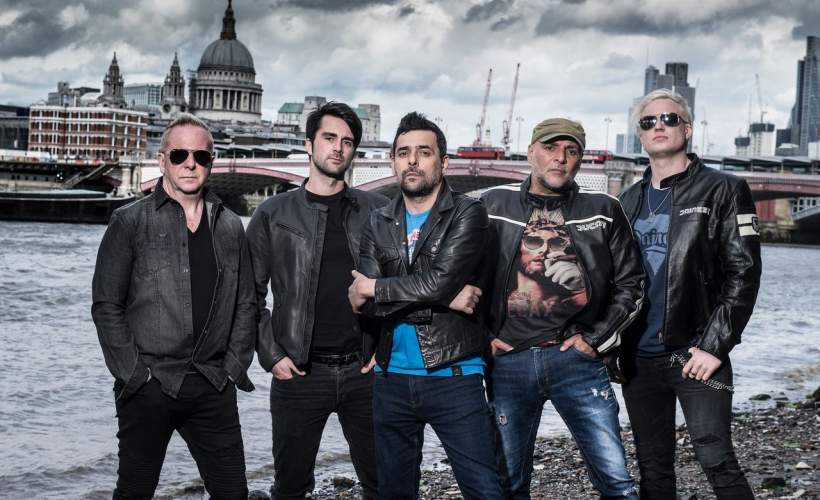 Great venue and sound. Close to transport links. Shame main act was only an hour.

In me were great altho unfortunately couldn't hear the vocals properly. Gun were amazing, really got the crowd involved and played a good mix of old and new. Will definitely see them again.

Tweet
Since forming in Glasgow in 1987, GUN have become one of Britain’s best loved rock bands. With over 1 million album sales worldwide, hit singles such as “Better Days” and “Word up” and tours with the likes of The Rolling Stones, Def Leppard , The Cult, Lynyrd Skynyrd and Bon Jovi. The band disbanded in 1997 and reform ed in 2008 , releasing a series of critically acclaimed albums and re - establishing themselves as consummate songwriters and performers.

September 2017 saw the release of the latest & biggest selling GUN album for 23 years, “Favourite Pleasures”, hitting the UK national charts at number 16. Recorded at the bands Morse Code studios in Paisley, Scotland, the album featured one of the strongest collection of songs in GUN’s career.

2019 sees the 30th anniversary of the release of Gun’s epic debut “Taking On The World ” . To commemorate this land mark the band are set to release a Best Of (Originals and Cover versions) double album featuring all the classics that GUN are known for.

They now announce a huge tour in support, with huge headline dates at Portland Arms in Cambridge on the 31st of March, then Rescue Rooms at Nottingham, The Globe at Cardiff, Night People at Manchester, Studio 5 Live @ Jam on Top in Keighley and The Cluny at Newcastle during April 2020.

Heavy rock band GUN are back to show the world what they are made of. The band are famous for their hit single Better Days and their absolutely amazing cover of Word Up! by Cameo. Today, the band members include singer Dante Gizzi, guitarist Jools Gizzi, drummer Paul McManus and Andy Carr on bass. Get your GUN tickets before they’re gone.

See them make a headline performance at Sheffield’s Foundry on Friday 29th of June 2018.

We know you are excited, but as more people hear the news the demand increases so please make sure you place your order for GUN tickets early because they will all be taken quickly.
Choosing your favourite gig tickets and placing your order is made nice and easy with Gigantic because you can browse our site 24/7 using your tablet, smartphone or computer.


Gun first started in Glasgow during 1987 and originally went under the name Blind Allez, and then Phobia before settling on the name.

Through sheer talent and amazing live shows the band were quick to gain the attention of major label A&M Records and were signed to them in 1988 and released their debut album Taking On The World the next year.

Interest renewed for the band with the release of a compilation album in 2003 entitled The Collection and The River Sessions live album in 2005. The band reunited in 2008 and brought out the two records Popkiller and Break The Silence.
The band released their latest album, Frantic, in 2015. A powerful album loaded with energy and excitement which is noted by critics to be “All Killer / No Filler”.

"We've had such an amazing time recording this album and had the privilege of recording it in some of the most prestigious studios across Europe, such as Sarm in London, ICP studios in Brussels and also on home turf at the fabulous Gorbals Sound in Glasgow . We believe that this album has captured the Gun style in every way and we hope the fans will love it as much as we've loved recording it! "

We only have limited supplies of GUN concert tickets available, so you will need to book yours before they are all gone. With ten years of experience giving excellent customer service, you can be sure of making a stress-free booking on your essential gig tickets with Gigantic.

Get GUN tickets for with Gigantic!