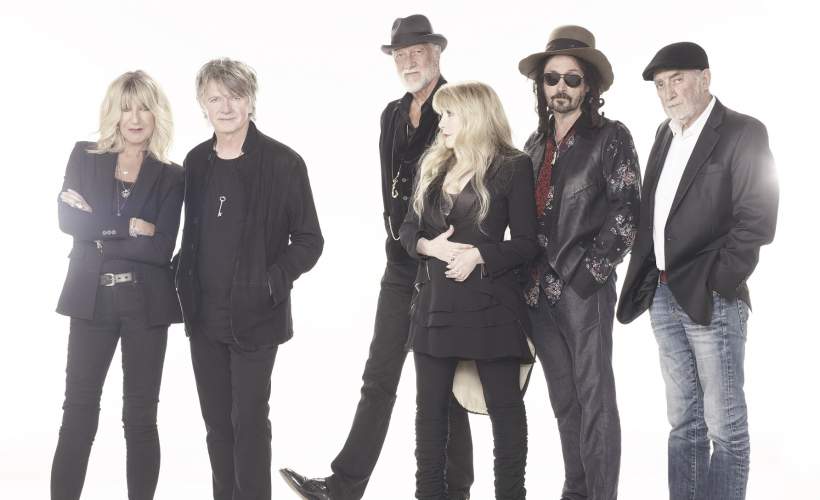 Fleetwood Mac are less a rock group and more of a cultural phenomenon. The classic band continues to write new material and thrill the latest generation. Now, they announce a major London gig at Wembley Stadium in London on Sunday 16th of June 2019.

Everyone loves live music, and what better way to enjoy them is to get Fleetwood Mac tickets and watch them perform? With the excitement building, everyone will be looking to make their booking so make sure you grab the gig tickets early or you may miss out. Fortunately, Gigantic makes the booking process easy as you can make your selection from our huge range 24/7 using your tablet, smartphone and of course computer.

It makes sense to set a personal reminder with Gigantic. It will set you ahead of the rest by alerting you with a text message or an email just before Fleetwood Mac gig tickets are released at 09:00 on Friday 26th of October 2018.


Fleetwood Mac has always been about an amazing collection of songs that are performed with a unique blend of talents. We jammed with Mike and Neil and the chemistry really worked and let the band realize that this is the right combination to go forward with in Fleetwood Mac style. We know we have something new, yet it’s got the unmistakable Mac sound,” said Mick Fleetwood.

“We are thrilled to welcome the musical talents of the caliber of Mike Campbell and Neil Finn into the Mac family. With Mike and Neil, we’ll be performing all the hits that the fans love, plus we’ll be surprising our audiences with some tracks from our historic catalogue of songs,” said the group collectively. “Fleetwood Mac has always been a creative evolution. We look forward to honoring that spirit on this upcoming tour.”

Fleetwood Mac was founded by Peter Green in 1967 and was named after Mick Fleetwood and John McVie. After Peter Green left in 1969, Fleetwood and McVie remained as original members, and the band has since featured a cast of brilliant talents. Most notably, Christine McVie joined the band in 1970, with Stevie Nicks and Lindsey Buckingham joining in 1974. The enduring spirit of Fleetwood Mac stands for an incredible body of great music that has connected with generations of people all over the world for more than 50 years. Fleetwood Mac has sold more than 100 million records worldwide and the GRAMMY-award winning band was inducted into the Rock and Roll Hall of Fame in 1998.

As the word spread, the demand keeps growing. But as we only have a limited amount of Fleetwood Mac concert tickets given to us by event promoters, we cannot stress enough how important it is to book yours.
Offering the very best selection on a wide range of gigs, festivals and events plus an award-winning customer services team helping you with your every enquiry; Gigantic should be your first choice whenever you are booking for your big night out!

Celebrate the start of 2019 by getting tickets for Fleetwood Mac

Get your Fleetwood Mac tickets with Gigantic!

A once in a lifetime experience to see a brilliant band, Stevie Nicks' voice was amazing, Neil Finn and Fleetwood Mac done a great version of his Crowded House 'Don't dream it's over'. They done a brilliant version of 'Black Magic Woman' as a tribute to Peter Green. Mick Fleetwood done a great drum solo, and the brilliant Tom Petty guitarist was a great addition and Fleetwood Mac done a great version of 'Free Falling' in tribute to Tom Petty. A great night. The only tiny criticism is The Pretenders sound was not great (the band and Chrissie's voice were great it was just the sound quality in the Stadium), also the screens were a bit small for Wembley Arena from my seat far away.

Stevie, Christine, John, Mick, (no Lindsay 🙁) but still the best concert I’ve ever been to! Waited 22 years to see them, I’ve been trying to get tickets since I was 17 and I’ve finally seen the best band in the world! You could say I’m biased but wow what an epic night I’ll never forget!

That's all we have for Fleetwood Mac! Check out their upcoming shows