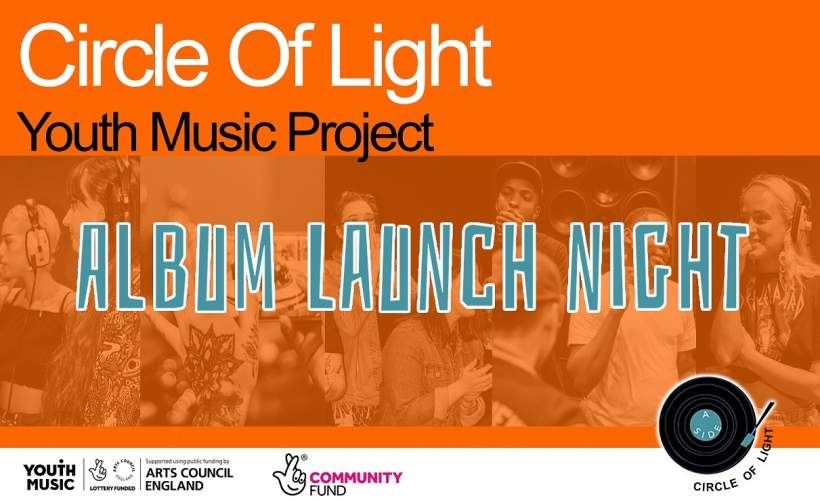 An impressive showcase of the next generation of Nottingham talent.

"Metronome is the best live venue for actual quality sound"

I was blown away by the circle of light performances. An album made in just 3 weeks by 40 18-20 year olds for world mental health day. The compare Scor-Zay-Zee was amazing, as were the musicians. The sound in the acoustically treated room at metronome was incredible and kudos to the engineers. An inspirational evening in such a relaxed atmosphere. The girl mae who performed is one of the best live acts I've ever seen.

An inspirational night, full of talent to look out for in the future. We need more projects like this!

I wasn’t sure what to expect from the group of performers, however I was blown away by some acts and loved the rapping. I have gone on the google some of the performers and have listened to more of their music. Very good night!

An emotionally cathartic album created by young people in Nottingham this summer as a way of exploring mental health issues is set to be released on World Mental Health Day with a live show at Confetti’s Metronome.

The Circle of Light project - funded by Youth Music - brought together 20 music industry professionals led by award-winning rapper Scorz-zay-zee to mentor around 60 young people through the process of producing a powerful and eclectic album with tracks created over three intense weeks.

The project has been followed by a BBC crew for an Inside Out documentary to be aired on 7 October, as well as support from BBC Nottingham including a guest spot on one of the tracks from presenter Summaya Mughal, and a surprise appearance at the workshops from Fun Lovin’ Criminals drummer Frank Benbini.

Clips from the documentary following two of the young people during the project as well as Scorz-zay-zee talking about how music has helped in his own struggles with schizophrenia and cannabis addiction will be shown at the live event.

Scorz-zay-zee said: “I'm completely blown away by what we achieved in three weeks. There is something special that happens when you put people together who all have a similar interest or
something in common. Beyond all the music, what we had was people jumping out of bed in the morning and racing to get to the studio and leaving with a smile. Some people just need a little boost and inspiration, that can be life changing. We also have a world class album, in my opinion one of the best albums to ever come out of our city."

Tiffany Holland signed up having never written music or performed expecting to be contributing behind the scenes. Instead, she found herself writing, rapping and singing with other participants and has been inspired to continue creating music.

Tiffany said: “I never thought I would be contributing to an album and it’s given me a massive sense of achievement. Not having a creative outlet was really affecting my mental health and it could have been a dark summer but thanks to this project, I’ve had loads of support and it turned into something light.”

Another participant, Izaak Lowe, was on the verge of quitting music altogether struggling with depression when he signed up. Now his electro-jazz track ‘Bleed Into Sound’ is one of the tracks to appear on the vinyl recording.

He said: “It’s been amazing to work with such a high calibre of industry professionals. As a result, I’ve now got my first ever track recorded and it’s given me the impetus to crack on and work hard at my music. Talking to people in the industry has also been massively useful to help understand how the business works.”

With two of the other participants now in the running for Youth Music awards in October, the Metronome show is a chance to see emerging new talent perform a live set featuring the diverse mix of songs from the album.

Mae Monypenny is up for the Best Live Performance at the Youth Music awards and has been invited to perform at the gala show in London in October.

Mae, who is autistic, said: “The project has really helped me and I’m so glad I took part as mental health should be talked about more. I’ve never managed to finish a track by myself but being around working musicians has been really helpful. I’m so happy with the outcome and my song Swim. It’s a very important track to me, it talks about drowning in emotions and underneath someone’s power and being in an abusive relationship.”

Another of the young people involved in the project has made it onto the shortlist for Best Original Track sponsored by the music video service Tik Tok, which has selected her song to feature on its platform. Kelsey Shaw created the song ‘Please Don’t Go’ to talk about her own mental health issues and the support she receives from her parents. With more than 600 nominations for the Youth Music Awards, being shortlisted is an incredible achievement and her track is now up for a public vote here.

Tricia Gardiner, project co-ordinator, said: “We are so proud of everyone who has been involved in Circle of Light. The collaborations and relationships that have been formed have been amazing. It’s so important to give young people a platform to speak out about mental health and use it as a way to help others who may be facing their own struggles too. That’s not to say the resulting album is in any way gloomy, it’s a joyful exploration of all aspects of human life and features everything from folk and hip hop to raps and heartfelt ballads.”

The Circle of Light album will be professionally released by Nottingham based record label ‘I’m Not From London’ in a variety of formats including limited edition vinyl.


Related to Circle Of Light

Circle Of Light joins up with Hockley Hustle & I'm Not From London to host Light Hustle online!