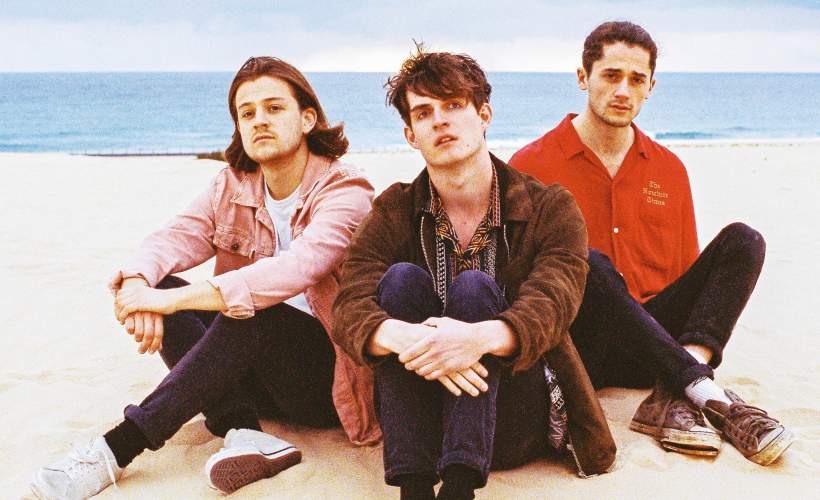 Cassia were as expected brilliant but I wasn’t expecting the added bonus of the White Lakes. Great energy with alternative Indie Rock at its best. The way they worked the crowd was awesome they look like a name fir the future for sure.


“Hi we're a tropical rock three-piece band based in Manchester. Relax, open a bottle of wine and watch us as we do boring things that have little to no relation to our music.”

The band are quickly emerging as the ones to watch, especially after their single 100 Times Over made BBC Radio 1’s Intro Track Of The Week upon release.

“What the hell, what the actual hell. Our track 100 Times Over was gonna be on Radio 1 like 6 times as their INTRO TRACK OF THE WEEK! I actually nearly cried” - Leff

Catch the awesome band when they tour extensively later in the year. Make sure you see them at Norwich OPEN, The Haunt at Brighton, Hare And Hounds at Brighton, Bristol Thekla, Nottingham’s Rescue Rooms, Scala London and Manchester Cathedral during October 2019.

You need to get your hands on Cassia tickets before they all get taken. Did you know gig ticket orders can be placed with Gigantic using your tablet, computer or smartphone 24/7 either home or away?

We really advise that you set a personal reminder with Gigantic right now. That way you are in front of the rest as we will send you a text message or an email as soon as they become available at 10:00 on Friday 29th of March.

“Grab me a cocktail in a carved-out pineapple” - Christian Carlisle, BBC Introducing

Be sure you book your concert tickets well in advance to avoid any disappointment. With everyone excited and clamouring for Cassia concert tickets you will need to act fast and get yours booked before they all go. Gigantic offers you superb customer service on a huge range of essential gig tickets so always choose us to make a stress-free booking for your big night out.

Cassia find escapism in bright, blissful melodies, but beneath the surface is a deep well of
introspection.

Together, Rob Ellis (lead vocals/guitar), Lou Cotterill (bass) and Jake Leff (drums) create cathartic songs that take full control of their emotions. "We know each other
best through writing music," Lou says. "It's all there in the lyrics."

The feel-good rhythms of debut album Replica (2019) made the Macclesfield band main-stage festival favourites and secured them a live session at BBC Radio 1's iconic Maida Vale studios. After two long years off the road, the video for surging 2021 single Similar captured the sheer joy of Cassia's return to the stage. The track's weighty guitar and
uncompromising attitude, a middle-finger to "bad energy", also marked a second kind of
milestone: "We've stopped worrying about what a Cassia song is supposed to sound like," Jake explains with a grin. "Now it's a whole new world."

This revelation feeds into Why You Lacking Energy?, the trio's vivid second album. From lush, spacious piano ballads to crisp, synth-driven anthems, the self-produced record digs into the tension in Cassia's music: these are songs that feel like living in the moment, but are caught up in thoughts of the past and anxieties for the future. Soaring new single Motions "feels like sand slipping through your fingers," they say, "and that wave of relief when you realise you're not alone." Empowering for the band as much as their listeners, Cassia make songs that turn fears into fuel.

Cassia are the sound of summer