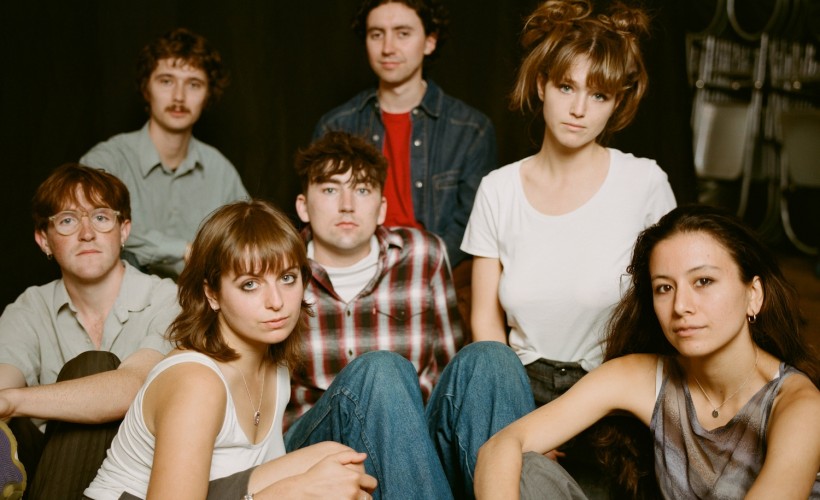 
Following the release of celebrated debut album For the First Time; London based experimental rockers Black Country, New Road announce a series of exciting shows in support of brand new album Ants from Up There - on sale with Gigantic!

Get your Black Country, New Road tickets with Gigantic!

Looking for the new sound of alternative rock? Black Country, New Road draw on a wide sphere of influences and have risen to become THE most innovative and exciting British band of the new generation with stunning debut album "For the First Time2. Now, their ascent continues with the release of second record "Ants from Up There" - one of the most highly anticipated albums of 2022!

Everyone loves live music, and what better way to enjoy them is to get Black Country, New Road tickets and watch them perform? With the excitement building, everyone will be looking to make their booking so make sure you grab the gig tickets early or you may miss out. Fortunately, Gigantic makes the booking process easy as you can make your selection from our huge range 24/7 using your tablet, smartphone and of course computer.

Black Country, New Road is a London-based 6-piece group formed mostly out of Cambridge consisting of: Charlie (Drums), Georgia (Violin), Isaac (Guitars / Vocals), Lewis (Saxophone), May (Synthesiser) and Tyler (Bass). Stalwarts of the burgeoning Speedy-haven Brixton Windmill scene, they formed out of the ashes of a previous project in the Summer of 2018 with influences including Shellac, Oxbow and Georgia’s experiences in Klezmer groups.

After hearing a few practice-room demos and live video footage online, Speedy’s Pierre Hall saw one of their shows at London’s Moth Club. ‘It was incredible. Every song twisted and turned in ways you didn’t expect, and lyrically, Isaac had this whole The Fall meets (William) Burroughs cut-ups thing going on, the lyrics seemed to tumble out of him - but they were clever and acerbic in equal measure. It was captivating to watch.’

"Athen’s, France" is their first single proper, recorded as always with Speedy head-honcho Dan Carey in his Streatham studio. The resulting track is a journey in itself. Detailing ‘a spectacular return to bad form; a romantic encounter; and a chronic fear of intercourse’ - it changes direction at every corner with a vocal delivery that sounds like Steve Albini meets Jarvis Cocker.

It was also one of the fastest Speedy’s ever put to tape - with the session taking place on a cold Sunday in January 2019 (the song having finished being written only the day before) - and being mixed / mastered by the Wednesday following. That urgency is captured in the delivery, a snapshot of a new and exciting band in the here and now.

Black Country, New Road dropped their debut album "For the First Time" at the start of 2021. Immediately provoking an immense reaction, the six tracks proved to be so provocative it not only galvanised their already burgeoning fanbase, but saw the young band nominated for the prestigious Mercury Prize - a true sign of their prodigious talent.

“These guys have defied the odds to deliver a collection that's all gold and no albatross.” - BBC Music

“The enigmatic London-based six-piece lay their flaws on the line in a jagged six-minute saunter of raw twists in course.” - The Line Of Best Fit

Black Country, New Road return with the news that their second album, “Ants From Up There”, will land on February 4th on Ninja Tune. Following on almost exactly a year to the day from the release of their acclaimed debut “For the first time”, the band have harnessed the momentum from that record and run full pelt into their second, with “Ants From Up There” managing to strike a skilful balance between feeling like a bold stylistic overhaul of what came before, as well as a natural progression.

Gigantic is the very best place to book your Black Country, New Road concert tickets, but with only limited supplies being made available, we do urge you to place your order before they are all snatched up.