Home Festival Beam Me Up Tickets 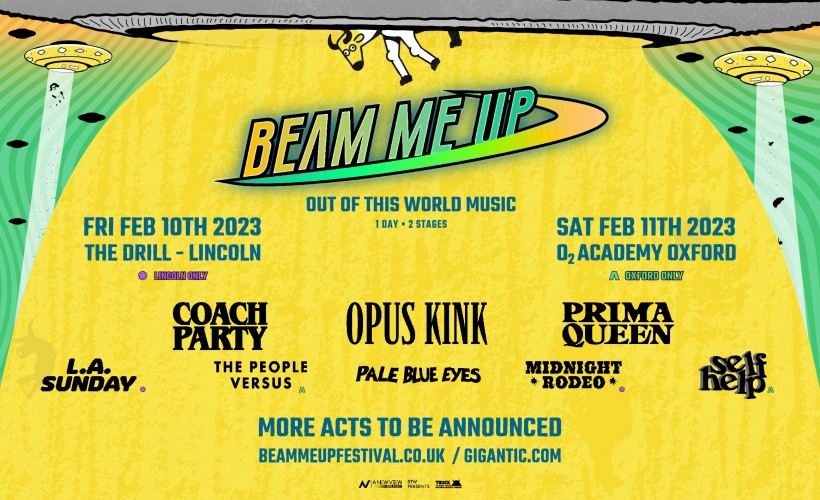 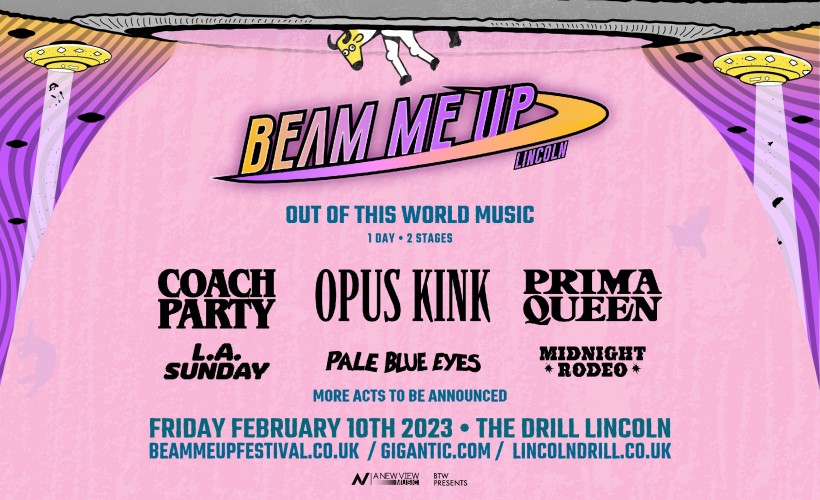 Beam Me Up Lincoln 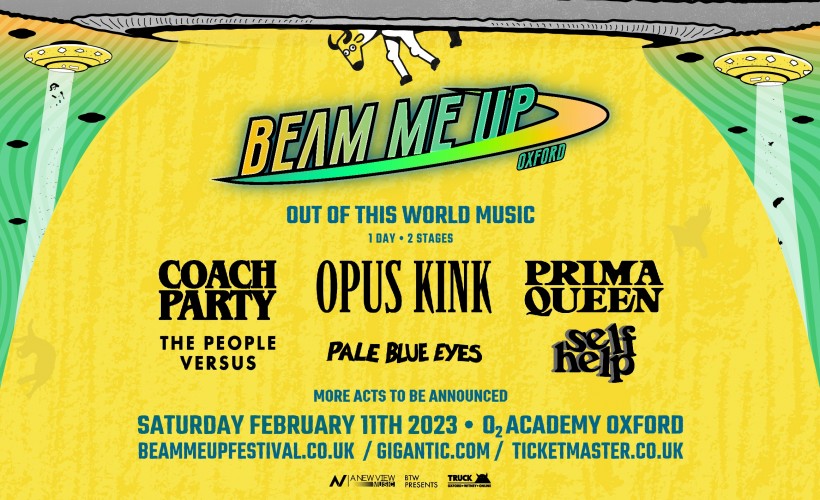 Beam Me Up Oxford

About Beam Me Up

Brand new music festival Beam Me Up has put together a mouthwatering line up of the hottest new bands around for its inaugural outing in Lincoln (10 February) and Oxford (11 February 2022).

Coach Party, Opus Kink, Prima Queen and Play Blue Eyes play both legs kicking off at The Drill in Lincoln on Friday 10 February before making their way to the O2 Academy in Oxford on Saturday 11 February.

With 12 acts across two stages, the team behind the new festival has brought their experience in events and knowledge of the two cities to bring some of the best new music to audiences at an affordable price with tickets starting from just £10.

As well as the line up announced for the main stage, the second stage for both legs will feature local artists, given an opportunity to play alongside the more established national touring acts.

Indie rock quartet Coach Party have been acclaimed by the likes of Annie Mac, Huw Stephens, Steve Lamacq and Radio X’s John Kennedy who dubbed them as ‘primed to explode’. Picked up by London label Chess Club famed for breaking new talent such as Wolf Alice and Jungle and with a well received EP under their belt, anticipation is high for their brand of pop delivered with plenty of wit by this Isle of Wight band.

Already earning a reputation for their exhilarating live shows Opus Kink are a six piece from Brighton who bring a brass-infused rock n roll to the stage. Somehow apparent chaos transforms into deep grooves from these exciting jazz-punks who released their debut EP on the tastemaker label Nice Swan records earlier this year.

Expect modernist pop music from Pale Blue Eyes, a trio who released their debut album with Full Time Hobby, the indie label that champions original and creative new music. The sweet synth lines and metronomic guitar riffs give the album a transportive, mind-shifting mood and show the band reacting to difficult times by making an album that pulses with exhilaration, beauty and joy.

Joining the line-up on the Lincoln bill are L.A.Sunday and Midnight Rodeo while Self Help and The People Versus are on the Oxford leg with further line up announcements for both cities still to come.

The team behind Beam Me Up have roots in both Lincoln and Oxford making them the perfect cities to launch the new venture. Promoters Jake Pell (A New View Music) along with Joe Davies (BTW Presents) explain the ethos behind their new venture.

Jake said: “The festival will be essential for everyone who wants to hear some of the most exciting new music in the UK. We’re committed to delivering this at an affordable price and providing what might be the last chance to see these bands up close before they go on to bigger things.”

Spotlight On: Beam Me Up

Exciting new festival Beam Me Up hits Lincoln and Oxford!

DO NOT MISS OUT! Get tickets for Beam Me Up with Gigantic!

That's all we have for Beam Me Up! Check out their upcoming shows