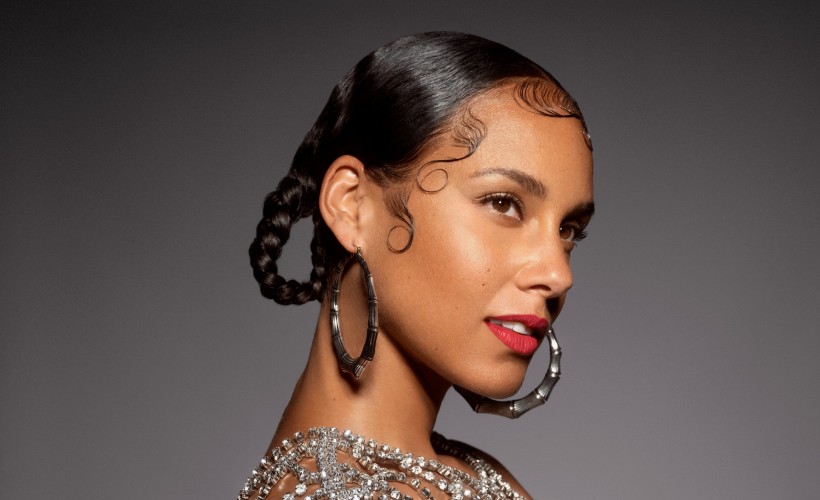 Born in New York in 1981, Alicia Keys has propelled herself from humble origins to become a true R&B icon. Since the release of her soulful, entrancing debut album ‘Songs in A Minor’ at the tender age of 20, the global superstar has gone on to sell well over 30 million albums and has performed in front of mesmerised audiences across the world. If you don’t want to miss out on the next Alicia Keys tour, be sure to check our website.

If you want to get a taste of what it’s like to experience the magic of Alicia Keys concerts, check out her 2013 live album ‘VH1 Storytellers’.

Keys cites Marvin Gaye, Nina Simone, Stevie Wonder and The Notorious B.I.G. among her musical influences, but there’s no doubt that this lady has style all of her own.

As the excitement builds the word is spreading. We expect massive demand for Alicia Keys tickets and so it is really important to act fast and book yours before they are all snatched up. Fortunately, placing any orders for gig tickets with Gigantic is made easy as you can access our site 24/7 using your computer, tablet or smartphone whist relaxing at home or whilst out and about.


Alicia Keys became an international star in the early 2000s with her sophisticated mix of classic and contemporary R&B. Behind the number one pop hit "Fallin'," her first album, Songs in A Minor (2001), sold more than 50,000 copies during its first day of availability and eventually moved over ten million units worldwide, thus setting the stage for the then-20-year-old's lengthy career. Since collecting five Grammys for her debut, Keys has continued to refine her signature sound, specializing in aching love ballads and feel-good motivational anthems, appealing to an audience far beyond her R&B base without being overtly pop. Her subsequent studio albums through the 2000s and 2010s, namely The Diary of Alicia Keys (2003), As I Am (2007), The Element of Freedom (2009), Girl on Fire (2012), and Here (2016), all reached number one or two on the Billboard 200 and produced crossover hits such "You Don't Know My Name" and "No One." Moreover, she earned routine recognition from the Recording Academy with ten additional Grammy Awards.

Alicia Augello Cook was born in Hell's Kitchen in early 1981. Raised by her Italian-American mother, she enrolled in classical piano lessons at the age of seven and began writing songs four years later. An education at the Professional Performing Arts School helped develop her vocal skills, and at the age of 16 she graduated as the class valedictorian. Two Columbias loomed on the horizon: Columbia University and Columbia Records, both of which extended offers. Although she attempted to make both options work, Keys found it difficult to juggle academic and professional commitments and chose to focus exclusively on her music career. Assuming the stage name of Alicia Keys, she began working with Columbia and contributed a song to the Men in Black soundtrack, but disputes with the label resulted in her contract's termination.

Keys bounced back by aligning herself with Clive Davis, the president of Arista Records, but work on her debut album stalled when Davis was ousted from the company in 2000. Davis soon formed his own label, J Records, and welcomed Keys into the fold with an aggressive publicity campaign (including an appearance on The Oprah Winfrey Show). Driven by the number one pop hit "Fallin'," Songs in A Minor was released in June 2001, debuted at the top of the Billboard 200, and rose to platinum status in ten countries. It featured a second Top Ten hit, "A Woman's Worth," and netted Grammys for Best New Artist and Best R&B Album, plus Song of the Year, Best R&B Song, and Best Female R&B Vocal Performance, all for "Fallin'." Keys didn't experience a sophomore slump with her follow-up. The Diary of Alicia Keys arrived in December 2003, entered the Billboard 200 at the top, and yielded the Top Ten singles "If I Ain't Got You," "Diary," and "You Don't Know My Name." She again won Grammys for Best R&B Album, Best R&B Song (for "You Don't Know My Name"), and Best Female R&B Vocal Performance ("If I Ain't Got You"). Additionally, "My Boo," a chart-topping duet with headliner Usher, took the award for Best R&B Performance by a Duo or Group with Vocal. Keys subsequently published Tears for Water: Songbook of Poems and Lyrics.

A live CD/DVD package, Unplugged, was issued in 2005 and kept Keys' streak of number one releases intact. She then took on acting work, starring in both Smokin' Aces and The Nanny Diaries in 2007, before issuing As I Am that November. Her fourth consecutive number one project, it was highlighted by the chart-topping "No One," which won her two more Grammys in the R&B field. ("Superwoman," released late in the album's promotional campaign, won Best Female R&B Vocal Performance the next year.) As 2009 drew to a close, Keys returned to the top of the singles chart with the hook on Jay-Z's "Empire State of Mind" (which also won two Grammys in the rap field), and in December released her fourth studio album, The Element of Freedom. Although it narrowly missed the top of the Billboard 200, it went platinum like all of her previous full-lengths, while it became her first number one album in the U.K. "Try Sleeping with a Broken Heart" and the Drake collaboration "Un-Thinkable (I'm Ready)" went Top 40 in the U.S.

During the next two years, Keys married producer Swizz Beatz, gave birth to a son, collaborated with Eve on the single "Speechless," appeared on Kanye West's all-star track "All of the Lights," and went on a brief tour celebrating the tenth anniversary of her debut album. She also wrote and co-produced "Angel" for Jennifer Hudson. In 2012, she appeared on albums by Emeli Sandé (Our Version of Events) and Miguel (Kaleidoscope Dream) before she released Girl on Fire, her fifth studio album and first for RCA. Issued that November, it featured her husband, as well as Sandé, Salaam Remi, Jeff Bhasker, Frank Ocean, and John Legend, among the collaborators. In the U.S., it became her fifth number one album and went gold, and also won that year's Grammy for Best R&B Album. Her second live recording, VH1 Storytellers, was issued in June 2013. Keys' recorded activity during the next year involved a collaboration with Kendrick Lamar, as heard on the soundtrack of The Amazing Spider-Man 2, and a pair of socially conscious solo tracks, "We Are Here" and "We Gotta Pray."

After Keys and Swizz Beatz welcomed a second son, Keys released another single, "28 Thousand Days," and appeared in the second season of Empire, for which she recorded "Powerful" with series co-star Jussie Smollett. The following May, Keys released "In Common" as a prelude to her sixth studio album and made her third musical guest appearance on Saturday Night Live. A few months later, she began a stint as a coach on The Voice and contributed "Back to Life" to the soundtrack for Queen of Katwe. Here, led by the biographical single "Blended Family (What You Do for Love)," arrived in November 2016 and peaked at number two on the Billboard 200. In April of the following year, Keys quietly released an EP called Vault, Vol. 1, consisting of previously unreleased material and new versions of earlier songs.

In early 2019, in conjunction with her hosting duties for the 61st Grammy Awards, Keys issued the single "Raise a Man." This was followed by an appearance on a remix of Pedro Capó's multi-platinum hit "Calma," and additional singles such as "Show Me Love" (featuring Miguel) and "Underdog" (co-written by Ed Sheeran). After she hosted the 62nd Grammy Awards, Keys prepared her seventh proper album, Alicia, for release in 2020.

Word is getting out, but with only limited supplies of Alicia Keys concert tickets being made available you will have to act fast and book yours before they are all snapped up. Combining excellent customer service with a truly vast range of essential gig tickets, Gigantic should always be your first thought when looking to book for your big night out.

Alicia Keys announces the new dates for their shows!