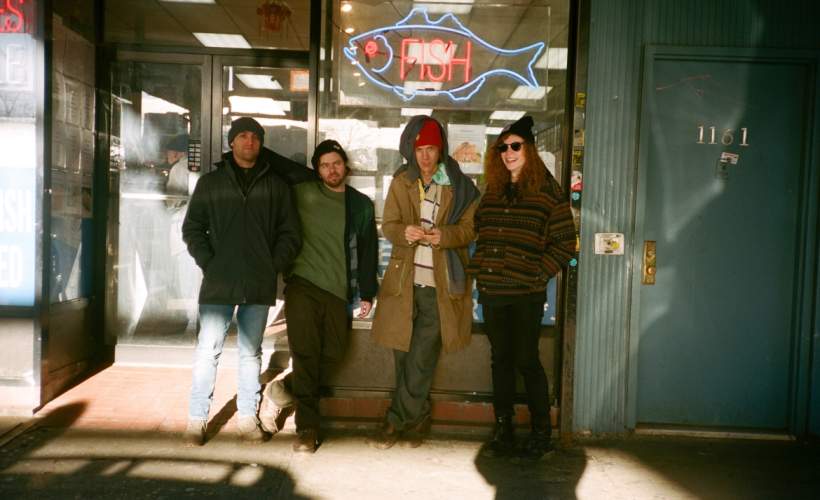 WIVES have announced a major gig at The Hope And Ruin in Brighton on Tuesday 12th of November 2019. Get your tickets with Gigantic.

There’s a gap between what we want, how it is, and what we want to be. An existential divide between how we dream, how we feel, how we think, and what actually gets done in the modern world. WIVES doesn’t know how to reconcile this, and they don’t try to give you the answer; instead, So Removed plunges into that void of unknown, a tangle of contemporary dread and optimism, mapping the gray areas of alienation.

Wide-eyed and hyper-aware, WIVES’ sound pulses with urgency. The Queens, NY four-piece is the latest fit into a long lineage of New York’s gritty, melodic-meets-punk. Their incisive debut, So Removed, is hook-driven, grungy dark-wave, tethered to daily anxiety without resorting to cynicism. Both the noisy dissonance of Sonic Youth and the clever, cerebral sneering of the Fall simmer as touchstones within the LP, sharp and prodding at the details. So Removed doesn’t know what the point of this is. And that’s okay.

Jay Satterwhite, the vocalist, guitarist, and primary songwriter of WIVES, explains feeling like society is often pouring its energies and emotions into the wrong directions: he somehow summons a call to re-direct, citing a line from the WB Yeats poem, “Second Coming,” as the best summation:

“The blood-dimmed tide is loosed, and everywhere
The ceremony of innocence is drowned;
The best lack all conviction, while the worst
Are full of passionate intensity.”

And WIVES’ So Removed offers an unflinching look at both ends of that spectrum.

Much like the record’s glaring at in-between moments, WIVES as a band came together by happenstance - a random realization amidst friends busy with other musical projects. Jay met Adam Sachs, WIVES’ drummer, while interning at a New York recording studio where Adam worked as an assistant. The two became fast friends, their constant hanging out growing to include guitarist Andrew Bailey and bassist Gabe Wax, who’d eventually be replaced by another friend, Alex Crawford. All were embedded in New York’s DIY music scene through their respective projects, with years of playing house shows and booking their own tours under their belts. It wasn’t until a random day of extra studio time booked for another project that the four of them actually played together.

That first day in the studio yielded the blistering “Waving Past Nirvana,” along with the jaunting “The 20 Teens” and the frenetic “Hideaway.” Jay was immediately struck - and surprised - by the recordings they had churned out. Upon writing more concise melodies and lyrics and returning to the studio, they listened back - and realized it was good.

“We kind of did it on a whim, a celebration of ourselves and our friendship, and of life in general; and when we heard the tapes back we were like, ‘Oh, okay,’” says Jay.

The foursome went on to self-release an EP via Bandcamp. The groove-meets-grunge sound quickly gained traction with listeners, but time and budgeting constraints slowed the band’s LP. So Removed, WIVES’ debut, came together in stolen moments across two years, mainly during off-hours at Brooklyn’s Trout Recording Studio with the band doing much of the recording themselves. Recorded to tape and with minimal overdubs, So Removed ripples with a visceral intensity and a live sound. Its clawing for sonic optimism butts heads with lyrics wading through the intensity of alienation.

“Waving Past Nirvana” trudges forward, a sort of thesis for WIVES’ sound. It delves unabashedly into feeling removed, its narrator rejecting spiritual enlightenment, literally 'waving past nirvana.' The swaggering cut pulls from the swaying beat of ‘80s rap, while the chorus jumps forward a decade into a grunge-tinged, anthemic roar. Jay recounts bringing the idea to the studio, and the rest of the band totally elevating the bones of the track: “It’s a function of me trying to be a mixture between Kool Keith and Lou Reed and failing, and the band being much sharper than me, and me then living up to the band’s track as they performed it.”

“Even the Dead,” was an improvised composition, its hypnotic, crunching sound conceived in one off-the-cuff take. “Servants,” a collision of melodic punk, has its hard edge softened by the inclusion of ‘60s vocal group harmonies. “Who ya serving?” Jay demands, adding later, “The people they go blind, to be servants to the right.” The poppier “The 20 Teens” is WIVES’ attempt to capture the definitive sound of contemporary rock; Jay cites hearing A-ha blaring at a Bushwick restaurant and thinking all of the lyrics might as well have been, “This is the ‘80s, this is the ‘80s,” and took his own stab at doing a track for the 2010s. “The 20 Teens” follows a stoned narrator enveloped by delusions of grandeur before being brought back down to earth, the chorus an exalted refrain of mundanity.

“Workin’,” meanwhile, plays out almost as a sonic collage, a track conceived in the moment while trying to record a different tune at 2 a.m. Jay’s vocals waver over droning guitars, an old poem scribbled into one of his notebooks revived atop killer guitar work mining the tension of Wire and the loping rhythm of The Velvet Underground. While keys pound in the background, “Workin’” skitters, a mixture between going stir-crazy in a walk-up apartment in Brooklyn, and that feeling manifesting in a look at the effect of global capitalism on working-class people.

The bulk of WIVES’ songs oscillate between macro and micro, veering from a zoom-in on the tiny everyday details to a sprawling pan over the world at large. “It’s picaresque --fiction, or maybe even speculative autobiography,” Jay explains of So Removed. “It’s narrative-driven fiction, but through the lens of personal experience.”