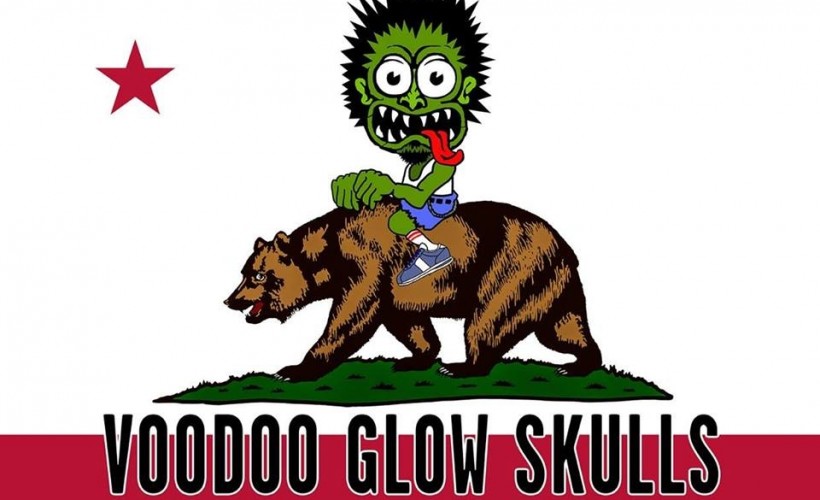 Formed in 1988 in Riverside, CA by brothers, Eddie, Jorge and Frank Casillas and childhood friend, Jerry O’neill. Voodoo Glow Skulls started out as 4 piece punk, funk, hardcore band. In 1991 they decided to add a horn section with Sax, Trombone and Trumpet.  After debuting with two 7" singles, the band released the LP Who Is? This Is? in 1993 on Dr. Strange Records. They toured America several times (alone and with The Mighty Mighty Bosstones) and signed to Epitaph Records in 1995. Their second album, 1995's Firme, was available in both Spanish- and English-language versions. Baile de los Locos followed two years later, and The Band Geek Mafia appeared in 1998. After enjoying a spot on the main stage at Warped Tour, Voodoo Glow Skulls returned in 1999 with Exitos al Cabron. Symbolic was issued a year later. The band jumped from local label Epitaph to the Chicago-based Victory Records for 2002's Steady as She Goes. Adicción, Tradición, Revolución followed in 2004. Voodoo Glow Skulls issued their eighth album, Southern California Street Music, in September 2007. In 2012 the band released “Break the Spell” on Smelvis records. Since then Frank Casillas and Jerry O’neill have departed the band but the band continues to tour successfully with Efrem Schulz handling the lead vocals and Steven Reese currently on the drums.

That's all we have for Voodoo Glow Skulls! Check out their upcoming shows