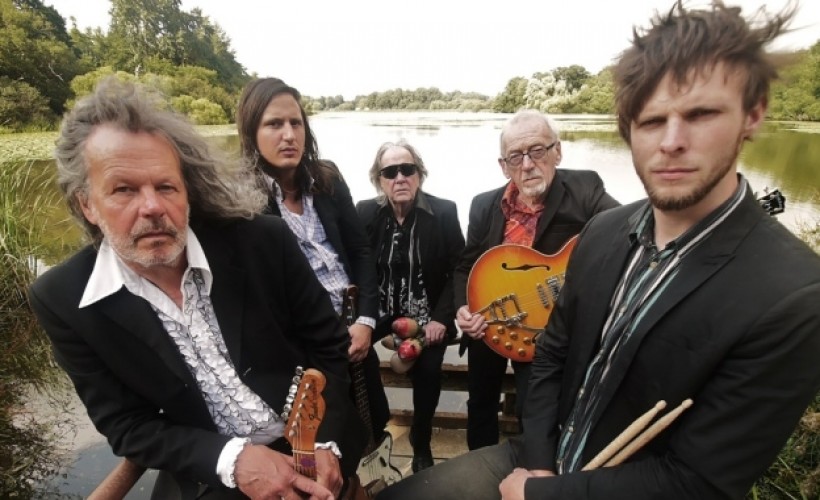 Were/are as good as The Stones.
Dick Taylor still a master of the fretboard. Phil May, powerful as ever.
What an amazing performance of Brit rock, blues and psychedelia at its peak.

""One of the grooviest experiences of my life""

Brilliant!!!!!!! They sounded as they did in 1960s and still had same aura. As groovy as ever. One of the best evenings of my life. Felt happy for ages afterwards and it was also near my ancestral homes(Derbyshire) In a way it was like seeing old friends but much more exciting.

"Rock as it should be"

The Pretty Things gave a super performance of rock, based mainly on their 1960's material.

After more than 50 years of continuous service, The Pretty Things ŌĆ" still featuring original members Phil May and Dick TaylorŌĆ" remain a significant, challenging force in Rock ŌĆśnŌĆÖ Roll. Despite their veteran status, their contemporary relevance, undiminished energy and inspirational commitment inspire emerging generations of new artists and young fans, whilst retaining their devoted, fanatical, core fan base.
Their career is a tribute to righteous, unswerving convictions, always chosen over a quick buck. It is no surprise that guitarist Dick Taylor chose to leave The Rolling Stones, which he had formed with Mick and Keith, to pursue a more raw level of energy with The Pretty Things.
And they still retain that energy, as befits one of this countryŌĆÖs most exciting live acts, whilst their recordings and song-writing maintain the same levels of inspiration and innovation that were set back in 1964, with the worldŌĆÖs first and best ever Garage anthem, ŌĆśRosalynŌĆÖ.
Underrated and often overlooked, The Pretty Things have had a seminal influence on Rock music. Their diverse and unexpected history has spawned countless imitators, many of whom have seen greater commercial success than their heroes, but The Pretty Things remain the original and the best.
Not content with being the first ever ŌĆ£garageŌĆØ band, glowingly acknowledged by Iggy, The Ramones, The Sex Pistols, and Nirvana, as a primal influence and guiding light. They created a world of rock and roll attitude (the first ever Rock ŌĆśnŌĆÖ Roll drugs bust and a lifetime ban from Australia and New Zealand provide credentials!) and still found time to create a cult world of incredible ground-breaking music ŌĆ" which is as influential now as their attitude was then.
The Pretty Things were responsible for the worldŌĆÖs first ever Rock Opera. Recorded in 1967 alongside The Beatles and The Pink Floyd at Abbey Road, S. F. Sorrow was the acknowledged template for The WhoŌĆÖs Tommy, and was, in 1998, another first, when it was recorded live at Abbey Road, with David Gilmour on guitar, for the worldŌĆÖs first ever Global Broadband Netcast.
This template for the Classic Rock Opera was often copied, but never bettered. Their template for the live recording of a classic album was picked up a few years later, are the shelves are now filled with similar formats of great records ŌĆ" Forever Changes, Oddessey And Oracle, and many othersŌĆ”

Where The Pretty Things lead, it seems, the rest will followŌĆ”
Following S.F. Sorrow the band created another, incredibly significant first. They wrote and recorded the remarkable album, Parachute. Recorded again at Abbey Road, it was votedRolling Stone magazineŌĆÖs first Record of The Year of the 1970ŌĆÖs, outclassing Neil Young, Led Zeppelin, The Stones, and The Who.
More importantly, Parachute was the only Rolling Stone Record of The Year, ever awarded toBerry Gordy and Tamla Motown, who had cannily signed The Pretty Things the year before, specifically to access the emerging and influential Rock ŌĆśnŌĆÖ Roll album market. Few realise that it took The Pretty Things to grant Berry Gordy his most valued wishŌĆ”. Album credibility.
Parachute was recognised by The Pink Floyd as the inspiration for Dark Side of The MoonŌĆ” and the rest is history (albeit not that well known!). In 1974, The Pretty Things were the first band to sign to Led ZeppelinŌĆÖs new record label, Swansong. This association re-kindled a long-standing relationship with manager, Peter Grant, and the bandŌĆÖs old friends, Jimmy Page (who played with them on record in 1965), and Robert Plant. It also spawned two great albums, and gave the band their first ever US chart LP, with Silk Torpedo. Their new profile spawned a lifelong friendship with AerosmithŌĆÖs Stephen Tyler ŌĆ" who acknowledges Phil May, the bandŌĆÖs singer, as his primal influence.
Throughout the 1980s the band undertook the huge task of attempting to get all their recorded copyrights back from their original record companies, who had universally failed to pay them or render any accounts. They subsequently became the first of the 1960ŌĆÖs bands in history to gain control of all their work. And in 1995, after ten years of court battles, they released another first ŌĆ" a dedicated 2 CD long-box that set the standard for all catalogue releases for the next ten years.
The Pretty Things have remained busy, including:
ŌĆó Awarded the first ever Mojo HeroŌĆÖs Award, presented by Seasick Steve and Kasabian.
ŌĆó They played with Bruce Springsteen at Hyde Park (at his request),
ŌĆó Headlined the Childline Rocks show at the O2.
Through their entire career, The Pretty Things have written, performed, and created informed, intelligent, ground-breaking, and original music, enabled by powerful, melodic writing that has kept this incredible band alive for more than 50 yearsŌĆ”
This should be a secret everyone knowsŌĆ”