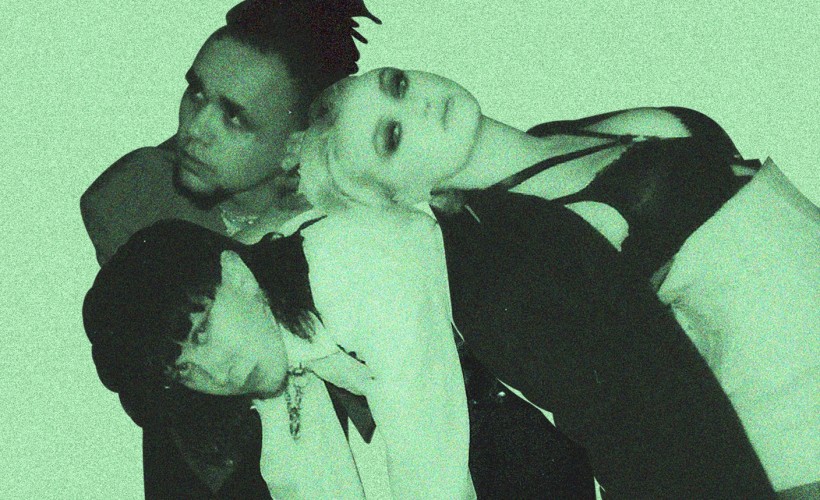 What Makes You a Man

What Makes You a Man

Make sure that you catch them at Oslo in London on Thursday 17th of March, 2022.

Gigantic is thrilled to be able to offer you The Ninth Wave tickets. But as the word spreads the demand grows. So, make sure you are quick off the mark and book your tickets before they are all taken. Placing a booking is made easy as you can visit Gigantic 24/7 using a tablet, computer or smartphone whilst relaxing or when on the go.

“With their post-emo aesthetic and a love for dark, despondent lyrics, you might be fooled into thinking that The Ninth Wave have used Glasgow's murky history as an inspiration for their sound. But if you listen hard enough, you might find something else -- something lighter -- lurking in there too.” - ID - VICE

As ever, there are only so many The Ninth Wave concert tickets being made available so please ensure you place your order before they are all snapped up. Please take advantage of our excellent customer services team who are ready and willing to answer your every query and help you select from our vast selection of the very best gig tickets.

Purveyors of rousing gothic post-punk and electronic-pop The Ninth Wave have acquired no shortage of famous admirers to date already - from Paramore’s Hayley Williams and Faris Badwan from The Horrors to fellow Glaswegians Chvrches. All of whom have shown great faith in the young Scottish band whether through invitations to play high-profile support slots or offers to help produce new material. But would any of it have been possible if the four-piece formed around frontman and guitarist Haydn Park-Patterson and bassist and co-vocalist Millie Kidd, now also featuring multi-instrumentalists Kyalo Searle-Mbullu and Calum Stewart, hadn’t first shown so much faith in themselves and one another?

Haydn started making music under the name The Ninth Wave when he was just 13, thrashing out AC/DC covers together with his cousins, and in spite of more line-up changes and false starts over the years than he cares to remember, he never ceased to believe that things would one day somehow all click into place. “I’m almost 24 now,” he laughs. “That’s scary.”

The bandmate and songwriting partner he had been looking for, the one who would instantly make things feel “more solid”, as Haydn puts it, had been known to him all along - his old friend Millie, with whom he goes all the way back to when they were “wee kids”. The two lost touch as they grew up but kept tabs on one another’s music projects. Out of the blue one day in late 2017, at a time when the band were already generating a huge buzz in their hometown and beyond fired by a string of ear-grabbing single and EPs, Haydn messaged Millie to ask if she’d be interested in joining The Ninth Wave to play bass. Even though she didn’t actually play bass.

“Haydn was like, ‘ah, it’ll be fine, the first gig’s not for two months, plenty of time to learn’,” laughs Millie. “My first performance was live on the radio for the Vic Galloway show on BBC Radio Scotland.”

“Do you know what’s even more mad than that?” Haydn adds. “Before we went onstage for her first gig a few days later, in the dressing room Millie was like, ‘I just realised I’ve never stood up and performed on a stage before’. Five minutes later we walked out in front of a sold-out King Tut’s.”

Millie for her part repaid Haydn’s confidence by dropping out of university so she could focus fully on the band. “I still had to sit my exams even though I knew I would never go back,” she remembers. “I didn’t even study �" and I’m someone who hates doing badly at things. I looked at the questions and thought ‘I don’t even know what these words mean’. And then I thought ‘it doesn’t even matter, because I’ve got a whole new life ahead of me.’”

She wasn’t wrong. Within a little over a year, The Ninth Wave were playing a knockout set at one of the biggest venues in Britain, supporting Chvrches by personal invitation at Glasgow’s Hydro arena (they would support Chvrches again a few months later at an outdoor spectacular in Edinburgh’s Princes Street Gardens). Their first shows in America swiftly followed - at SXSW in Austin, in New York and in Los Angeles. April 2019 saw the release of part one of The Ninth Wave’s debut album Infancy via London’s Distiller Records, with part II following in November. “It was just us being greedy, really,” explains Millie of the decision to release their debut album in stages. “We wanted to allow more time to kind of let the album sit with people. The first time you listen through an album, it’s all just kind of like a big mush. By breaking it into parts you can let people focus on the tracks more.”

Recalling crepuscular cult heroes of a bygone age from Bauhaus and The Chameleons to The Sound and the Cocteau Twins (“my mum told me I was bloody conceived to the Cocteau Twins!” Millie reveals), all with a beguiling freshness and maturity much beyond The Ninth Wave’s years, Infancy is striking for all kinds of reasons. The power and potency of the band’s performances, the thorny hooks, the arrangements stacking layer upon layer of synths and guitars into monolithic towers of sound capped by the stirring dual attack of Haydn and Millie’s combined voices, which seem to blend and strengthen one another with preternatural ease. “Their sound is a brilliant, bleak mixture of 80s rock bands like The Cure and Sonic Youth,” as VICE put it, “but with a synth pop sheen - the kind of thing you might listen to while smoking in the bath and ruminating over past lovers if you were feeling particularly dramatic.”

The Ninth Wave have won praise from the BBC, The Guardian, The Skinny and DIY among others to date, and their streaming numbers are already well into the millions. For all that their emergence as one of the most exciting new bands in Britain has been years in the making, you could be forgiven for thinking they’d dropped into existence fully formed out of nowhere. Especially judging by stunning doomy-androgynous photographs of Haydn and Millie that wouldn’t look out of place in arthouse fashion magazines. Little wonder they’ve collaborated with fashion iconoclasts including Saint Laurent’s Hedi Slimane and disruptive London-based Glasgow designer Charles Jeffrey.

With the new line-up now featuring Kyalo and Calum - friends of Haydn and Millie’s from other bands on the Glasgow scene, who share equally in songwriting duties - The Ninth Wave open an auspicious new chapter of their story with the release of the Happy Days! EP. Recorded in part at the suitably gothly titled Black Bay studio on the tiny island of Great Bernera in the Outer Hebrides of Scotland, produced with Faris Badwan and engineered and mixed by Max Hayes, it’s The Ninth Wave like you’ve never heard them before - rawer, realer, more playful and more revealing.

“Faris has wanted to work with us for ages,” speaks Millie of The Horrors’ frontman. “From the very first EP he’s kind of had his eye on us because he really liked our sound.

Six by-turns danceable and downbeat instant anthems to fucked up romance, the Happy Days! EP (the title is just ever-so-slightly tongue-in-cheek) finds The Ninth Wave pushing their sound in all sorts of new directions with quicksilver electronic beats, dream-pop soundscapes, larynx-shredding emotional catharsis, harsh noise and rich tonality informed by a love for all from the Twilight Sad to FKA Twigs and Björk.

“I’ve tried to listen to more like different sorts of music than just fucking 80s stuff,” Haydn notes. “I play guitar less; I’m getting in to writing more on synths and drum machines.”

If there’s one thing about the new EP that seems to stand out more than any, it’s the way that both of The Ninth Wave’s singers’ voices are pushed closer to the fore, their Scottish accents more pronounced. “I think we both have grown a lot more into singing in our own accents,” reflects Haydn. “I’m not saying we didn’t mean anything we’ve sung before but, I think we’re being truer to ourselves this way. It’s not even a deliberate thing - I didn’t even realise I was doing it until I listened back to the demos.”

“I think it’s a confidence thing personally,” Millie adds, “because when you first start singing, you’re kind of trying to be the best version of yourself you can be. But it feels more raw when you sing the way you actually sound. We’ve stripped back a lot of the layers.”