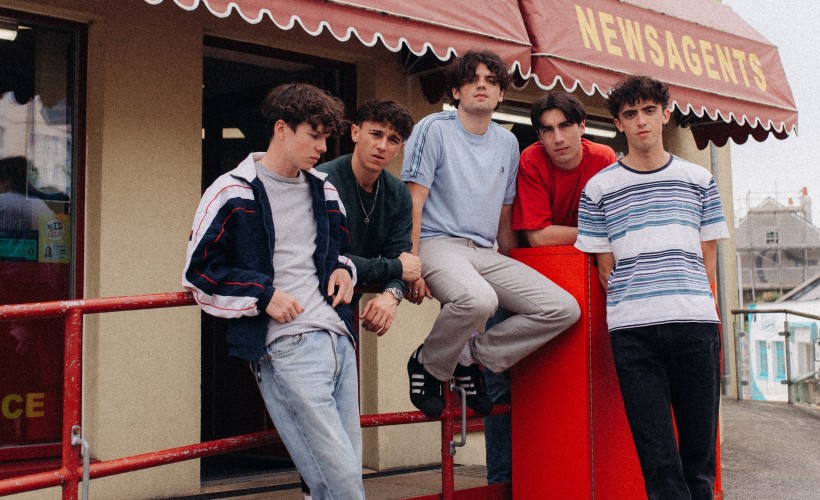 The Native The Louisiana, Bristol

You can count the musical success stories that have come out of Plymouth on one hand but local lads The Native aren’t letting that hold them back. “Some people think coming from Plymouth is a bad thing for your career” starts Charlie Noordewier, The Native’s vocalist. “We’re really proud to come from down here though. We want to put Plymouth on the map with our music.”

Formed when Charlie and guitarist Ben Andrew were in secondary school, The Native first took shape in classes for GCSE Music. Jamming in practice rooms instead of doing their coursework, the pair eventually turned those initial ideas into a dreamy folk-facing EP that was released in February 2018. When offers of live shows started rolling a few months later, they recruited bassist Tom Booth alongside Harry Youngs on keys.

The fledgling group didn’t get a chance to ease into things though. In July, they won the chance to support Bastille at Plymouth’s Hoe Park as part of MTV’s Ocean City Sounds. Despite scrambling to find a drummer (luckily a friend of Charlie’s mum put him in contact with Max Williams) and with one full band practice under their collective belts, the baby-faced group played to 8000 people. “It was a really, really good gig,” beams Charlie. And they wanted more.

“Because the first thing we did together was that gig, we instantly had a snapshot of what this band could become. That drove everyone on to want to do it, and take it really seriously,” starts Harry before Charlie explains “from that moment, we knew we wanted this to be a career band. We want to push it as far as we go.”

They took a few months away from the studio to finish up their A-levels but just one week after that final exam, they played their biggest ever headline show at Plymouth Pavilions. Any niggling doubts about getting a proper job were stamped out that night by the reaction the band got. All five of them agreed “let’s do it.”

“We all committed to a gap year style project,” explains Harry. “For twelve months we’d give it everything we had and see where we are after that. It’s just never stopped,” he grins. “I don't think anyone's looked back or considered doing anything else. We’re loving it and it feels like the music's getting better and better. You wouldn't stop now, would you?”

__
Right now, The Native are full of confidence but that wasn’t always the case. Coming from the South West of England gave them a unique complex.

“From a really young age, I’d wanted to make music,” starts Charlie. “But it didn’t really seem possible. It was unheard of for anyone down here to make it.” Harry agrees, “there was this idea that you couldn’t make it unless you were from London.”

Not only was there a lack of local success stories, but touring bands didn’t really make the trip down. The furthest south they typically go is London, a convenient 5 hour train ride away.

“There’s not a lack of people who love music in the south west either,” explains Harry. Local venues are packed every weekend with shows by various punk and ska bands and there’s plenty of small festivals throughout the summer months. “It really had an effect on me at the start because it felt so isolating,” explains Charlie. “We’d never gigged outside of Plymouth, there weren’t many opportunities to support bigger bands and we didn’t know anyone in the industry. We were really happy with the music we were writing but it felt like no one would ever hear it.”

“You want to tour desperately,” continues Harry. “But if you want to book a gig in Manchester, where on earth do you start?” The band had serious conversations about moving to London but, with the pandemic putting everything on pause and the band gathering momentum on streaming, they realized they didn’t need to leave Plymouth. “Lockdown has proved that physical proximity isn't necessary for work. It's not about where you are, it's just about what you do.”

Growing up away from any sort of local scene has given The Native an anything-goes pool of influences. Forced to rely on The Internet to get their live music fix, their list of influences ranges from The Verve and Oasis, through Coldplay to The Cure, Kings of Leon and Catfish and The Bottlemen. “We always liked people who could play live,” explains Harry. Their varied influences don’t stop with music either. In the past couple of weeks, the band have written songs inspired by Trainspotting, Guy Ritchie films and Steven Spielberg’s ‘Super 8’.

On their first EP, Charlie and Ben were going for a Ben Howard vibe. However that shifted after they got a full band behind them and started playing live. According to Harry, The Native aren’t “influenced by what other people want but the crowd reaction to a big indie anthem is so fun, it’s impossible to resist.”

“We want to provoke an emotional response,” continues Charlie “but we also want to keep it poppy. I know for some guitar bands pop is seen as such a negative thing but why wouldn’t you want your songs to be catchy?”

They’ve already built themselves a varied back catalogue of festival-ready anthems. Other Side’ was written about having big dreams but not being sure if they could be achieved, ‘Lost On You’ is a song of unrequited love and ‘In My Mind’ was written during the first lockdown, as the band craved some sort of social life. “The things I do just go sit in a kebab shop and chat shit at three in the morning,” laughs Harry.

There’s more to this group than heartbreak, hitting the bottle and hating their hometown though. ‘Chasing Highs’ was written about addiction and the ongoing problem with drugs that the band see all around them. “There’s no understanding. The only advice is ‘don’t do it’ which seems stupid. It feels like something that actually needs to be talked about more,” says Harry. Breakaway was written about Brexit, as the young band watched opportunities for their generation taken away from them. The first line is “you’re a victim of the times” and according to Charlie, it sums up the whole song which is a middle finger up to the government. “None of us could vote and we felt frustrated that we weren’t being represented.” Elsewhere ‘Frontline’ was written in the hope of starting a conversation about domestic abuse.

“It’s important not to just shy away from stuff that seems a big ugly or awkward to write about,” says Harry while Charlie summarises it by saying “we just write about how we feel.” They're a band who take their frustrations at the world, and try to spin them into positives. “The lyrics might be angry but by presenting them as indie bangers, it makes the themes more accessible. You’re getting your message across even further,” says Harry. “Hope naturally creeps into our music because we are optimistic, young guys. The world is messed up right now but it will get better. “

The Native are a band who know what they want. On their next EP, they want a really raw, powerful performance that’ll be perfect for sweaty shows whenever gigging gets the green light. They’re currently cutting down seven tracks to five for it. Elsewhere EP 3 will be more pristine and 80s influenced. The band already has over 30 songs for that record, with more being created every week. “Before we were worried about songs being too poppy, too nostalgic or too outspoken. Now, we just want the best songs, whatever they are.”

The band admit they felt a pressure to go viral following the explosion of TikTok over lockdown “People spend hours everyday trying to make one 15 second video go viral,” but agree “it's so fleeting. As Charlie says, “We want something that stands the test of time.”

“That's always going to be the priority, making music we're proud of and to push boundaries whenever we can. We want to be one of the biggest bands in the UK really,” declares Harry though The Native have never really considered an ultimate goal. “We’ve never really thought about where it will stop. We don’t really see it ending,” starts Charlie. “Headlining Glastonbury would be amazing, but that’s every band’s goal. We just want loads of people to connect to our music.”

“When I was a teenager, there were a few bands who were really influential,” Charlie continues. Bands like The 1975 “impacted how I lived my life, my personality and how I dressed. They really helped me understand things that I hadn’t experienced. That’s what I want this band to be, even if it was for a few 100 people.”

“They also always gave a big fuck you to social norms and what you’d expect from an indie band,” continues Harry with a glint in his eye.

In spite of everything, 2020 was the most successful year for The Native. More confident and with a better idea of what sort of band they want to be, they’re going in to 2021 with a real sense of purpose. They didn’t realise how much gigging meant to them, until it was taken away. Now? “We just want to create mental live shows. Before lockdown, we were alright live but now, with this new music and the time we've had to perfect it, our gigs are really going to really replicate that festival feeling. It's just about getting a room full of people, all feeling the same thing at the same time.”

“We want it to feel feral,” continues Harry. “We want people to forget whatever’s going on around them. There'll be no 'who's this person next to me', instead its arm around them, let's have a good time. We all need unity at the moment, don’t we?” The Native are here to provide the perfect soundtrack for that sense of togetherness.