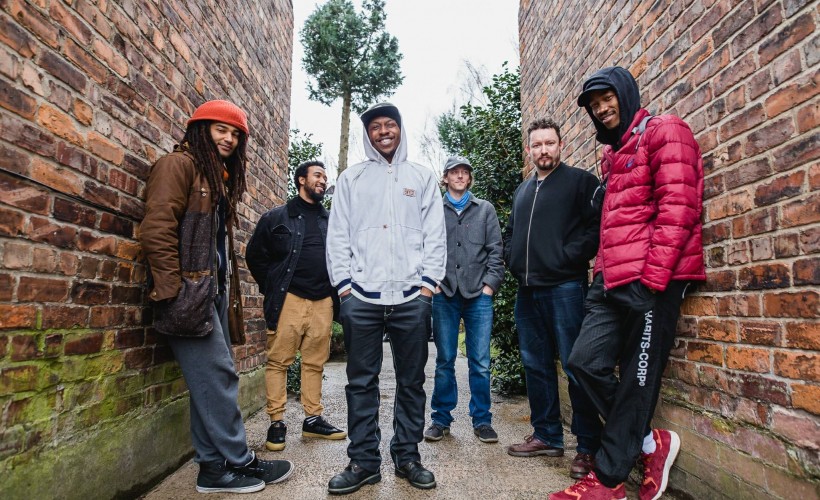 About The Mouse Outfit

The Mouse Outfit is a 9 piece live band and production team centred around Chini (keys), Pitch (percussion/MPC) and Defty (bass). Their acclaimed debut album won UK hip hop album of the year 2013 (Wordplay Magazine) and was ranked in ABC News’ top 50 albums of 2013. Since the release of ‘Escape Music’ (which is now available on double vinyl through HHV.DE), their profile has increased significantly, both within the UK and internationally. The album featured many of Manchester’s most talented MCs, but the live show is fronted by UK hip hop legend Dr Syntax and verbal acrobat Sparkz. A horn heavy and funk driven live show combines original material with medleys of classic hip hop and bboy breaks, which has lead the band to be a firm favourite at festivals and clubs throughout the UK. Earlier in their career they built a loyal fan base supporting many of the world’s finest hip hop acts including Chali 2na, Souls Of Mischief, Akil the MC and The Sugarhill Gang. Their reputation as a high quality live act resulted in two invitations to perform at the BBC’s legendary Maida Vale Studios in London. 2014 saw the band take their brand of funk, jazz and reggae influenced hip hop to France, Germany, Italy, Hungary, Czech Republic and Croatia, with key slots at prestigious festivals such as Soundwave, Outlook and Fusion.

The Mouse Outfit are due to release their second album in early 2015 and follow this with a series of European shows and an extensive UK tour. Expect further collaborations with some of the most talented vocalists the UK has to offer and a brand new live show.

That's all we have for The Mouse Outfit! Check out their upcoming shows