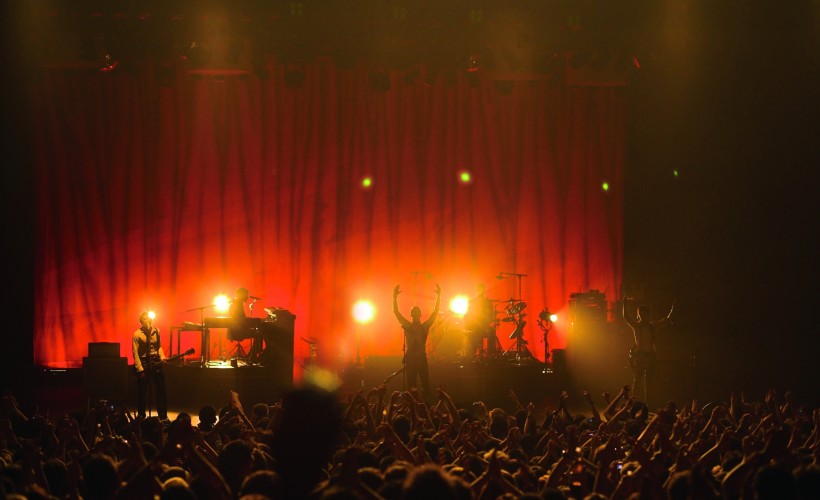 WE LOVED THE VENUE HAVING NEVER BEEN THERE BEFORE. IT WAS LOVELY TO HAVE A SMALL PLACE WITH A REAL ATMOSPHERE WHERE YOU FELT CLOSE TO THE BAND. WE LOVE THE FEELING HAVING TRAVELLED UP FROM CORNWALL TO SEE THEM BUT ALTHOUGH THIS WAS THEIR 12 YEARS AND HOME TOUR WE WOULD HAVE LIKED A FEW MORE OF THEIR OLD FAVOURITES AS WELL. THOUGHT THEIR PERFORMANCE WAS QUITE SHORT.

"Blown away by The Feeling"

Dan and the boys have not lost a tiny part of their musicianship , vocal abilities ,or stage presence , in this glorious dive into an album of very fine songs . From the opening chords , I felt all those around me were yelling all the words, to all the songs , caught up in the journey from 2006 to here . The O2 academy is a very fine venue for this sort of occasion ,, the sound quality was everything you could expect, and the show was masterminded , and managed to perfection . I would go again tomorrow .

The Feeling are a BRIT award-nominated English pop rock band from West Sussex and London.

The Feeling have just announced shows at Cardiff’s Tramshed and O2 Academy Bristol to celebrate twelve years since the release of their incredible debut album.

We are very pleased to be able to offer you The Feeling tickets, but as the words gets around the demand also rises so make sure you book yours before they are all snatched up. Place an order for gig tickets is made easy with Gigantic because you can access our site 24/7 using your computer, tablet or your smartphone.

Make sure you set a personal reminder with Gigantic so we can alert you just prior to the release of the tickets at 09:00 on a Friday with a text message or an email.

Drawing heavily from the rich harmonies and melodies of '70s soft rock, British quintet the Feeling includes vocalist/guitarist Dan Gillespie-Sells (previously of Scottish pop/rock act Speedway), bassist Richard Jones, guitarist Kevin Jeremiah, keyboardist Ciaran Jeremiah, and drummer Paul Stewart. Former students of the Brit School of Performing Arts in Croydon, the quintet initially performed as Super Fly, a resident cover band playing at La Tania Ski Resort in the French Alps. The bandmembers soon realized they wanted to create their own classic rock-inspired pop and, upon returning home, rechristened themselves the Feeling. One month after their return, the Feeling had landed a record deal.

With the backing of Island Records, the band's polished debut, Twelve Stops and Home, was released in the U.K. in June 2006, where it charted three Top Ten U.K. singles ("Sewn," "Fill My Little World," "Never Be Lonely") and garnered a Brit Award nomination. The album was re-released on the Cherry Tree/Interscope label the following year in America -- complete with revised cover art and a retooled track listing. In the U.K., the band's popularity continued to soar, and their sophomore effort, Join with Us, topped the U.K. charts upon its release in February 2008.

In 2011 they released their third album, Together We Were Made, which peaked at number 22 in the U.K. charts. Later that year a collection titled Singles: 2006-2011 was released and contained all 11 singles from their three studio albums, including hits "Fill My Little World" and "I Thought It Was Over." Two years later the Feeling returned with their fourth studio outing, 2013's Boy Cried Wolf. Although only peaking at number 33 on the U.K. album charts, the album received positive reviews and was described as "the album of their career."

In 2016, they returned with their fifth studio album, The Feeling, featuring the single "Wicked Heart." Partially crowdfunded, the album was recorded live in the studio over a brief ten-day period in an attempt to better capture the energy of the band's live shows. Following a tour for the self-titled album, the bandmembers announced they were going on indefinite hiatus.

With limitations on the amount of Gwenno concert tickets being made available for sale, we do urge you to act fast and book yours before they have been snapped up. Offering a huge choice on a wide selection of essential gig tickets plus excellent customer service, Gigantic has been named by Nottingham Post as their ‘Retail Business of the Year 2017’ meaning you know we are the right place to come whenever you are booking for your big night out.