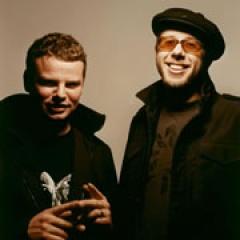 Tweet
The Chemical Brothers broke out of the underground raves and acid house scene to become amongst the world’s biggest dance acts of all time!

They have just announced that they will be headlining the incredible All Points East on Friday 24th of May 2019.

Gigantic is the best place to get your The Chemical Brothers tickets. Offering a huge selection which you can choose from 24/7 using your smartphone, computer or tablet, we offer a stress-free service which you can rely on.

Live music has never been more popular, so you need to be ready for the release of tickets for your favourite act. Set a personal reminder with Gigantic which will alert you with a text message or an email just prior to the release of The Chemical Brothers gig tickets at 09:00 on Friday 9th of November.


2018’s inaugural year saw headline shows from Nick Cave & The Bad Seeds, The National, LCD Soundsystem, Bjork, The xx and Catfish and the Bottlemen with an astronomical supporting line up across two weekends of award-winning music.

This year will be kick started by The Chemical Brothers, one of the UK and the world’s biggest dance acts. Following 2015’s number one album Born in the Echoes (a record sixth consecutive No.1 album for the band) and their recent sold-out weekend of acclaimed shows at Alexandra Palace, they have just released new single ‘FREE YOURSELF’. Already a live favourite, the duo’s first piece of new, original music for two years was also recently named Radio 1’s ‘Hottest Record’ by Annie Mac.

The Chemical Brothers live shows have always been legendary and with huge hit singles ‘GO’, ‘Hey Boy Hey Girl’, ‘Block Rockin’ Beats’ and expectation for even more new music soon, this is one not to be missed.

With their first festival announcement for 2019, Hot Chip were last seen celebrating the release of their acclaimed sixth studio album Why Make Sense in 2015, establishing the five piece at their creative peak, while taking their place as one of the UK's best and most loved live acts. Known for their jubilant shows that sees a roll call of surprise guests join them on stage - including David Byrne, Caribou and Sinkane - their performance at next year’s All Points East is set to be a memorable one.

Joining the Chemical Brothers is Primal Scream a band that has demonstrated a savvy for keeping themselves current throughout their 30-year career, unlike many of their peers born out of that era. Their latest album, the mighty synth-pop laden Chaosmosis featured the likes of Sky Ferreira and Haim, while their live performances show no signs of slowing down either. Frontman Bobby Gillespie continues to wield a striking presence, leading his iconic band through their extensive back catalogue from the Mercury Prize winning Screamadelica and Vanishing Point to XTRMNTR and the David Holmes produced More Light.

Legendary space rockers Spiritualized returned this year with a new album, And Nothing Hurt, after a six year hiatus, shrouded in their usual air of mystery. The audacious and uncompromising band are revered for their transcendent live shows, with the ever enigmatic leader Jason Pierce’s performances at once poignant and defiant.

Swedish electronic adventurers Little Dragon have not only featured on some of the last decade’s best records from Gorillaz, Big Boi, De La Soul and SBTRKT, but are also highly recognised for their own work with 2014’s Nabuma Rubberband receiving a Grammy nomination.

All Points East is also thrilled to welcome esteemed hip hop ‘auteur’ Danny Brown to Friday’s line up, who counts Kendrick Lamar and Earl Sweatshirt among his many collaborators and both appeared on his wildly acclaimed 2016 album Atrocity Exhibition. His cinematic approach to music makes for an intoxicating and atmospheric live show.

Tipped by Kendrick Lamar and Jay Z no less, the North London MC Little Simz self released her debut album in 2015. Regularly joined on stage by Kano and Stormzy, her All Points East set will be a hometown celebration.

There are only limited amounts of The Chemical Brothers concert tickets being put on sale by promoters which means you are going to have to act fast and ensure you get yours before they all are taken.

Award-winners Gigantic allow you to choose from an ever-growing range of the most essential gig tickets with the benefits of a skilled customer service team ready to help with your every enquiry. Our passion for music shines through and reflects in your experiences, so you know we are the best place to come whenever you are booking for your big night out.

Related to The Chemical Brothers

The Chemical Brothers are hosting a Listening Party of their classic album ‘Dig Your Own Hole’!