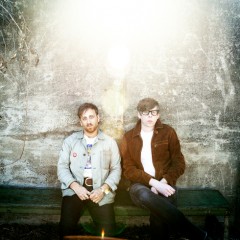 The Black Keys have confirmed five UK tour dates in February and March 2015 as part of their Turn Blue World Tour. The UK leg comprises concerts in Manchester, Birmingham, London and Leeds.

The tour celebrates the duo’s highly acclaimed new album, Turn Blue, which recently debuted at #1 in the US and at #2 in the UK. This is the highest chart debut yet for the band, whose previous album, El Camino, debuted at #2 in the US and #29 in the UK in 2011. It is also the first #1 album for The Black Keys’ worldwide label, Nonesuch Records, which is currently celebrating its 50th anniversary.

Additionally, Turn Blue is the band’s highest charting album to date internationally, debuting at #1 in Canada and Australia, #2 in New Zealand and Croatia, #3 in Ireland and Hungary, #4 in France and Switzerland and # 5 in Austria and Holland. The album also charted in the top ten in Germany, Belgium, Finland and Portugal.

In June The Black Keys embarked on an extensive European festival tour, including, in the words of the NME, ‘a rampant raucous performance’ at Glastonbury. According to the Guardian, ‘The Black Keys have got better as they've got bigger, revealing a talent for fiendishly catchy classic rock.’ The band will headline Latitude on July 20, followed by a North American tour this autumn, with special guests Cage The Elephant, Jake Bugg and St. Vincent.

This is the eighth full-length album from the duo and the fifth on Nonesuch. Turn Blue follows 2011’s critically and commercially acclaimed El Camino, which is now certified RIAA Platinum. Internationally, El Camino is Gold in Belgium, Spain, Italy and Holland; Platinum in Ireland, France and the UK; and double Platinum in Australia, Canada and New Zealand. The record also resulted in three awards at the 55th annual Grammy Awards “ Best Rock Performance, Best Rock Song, and Best Rock Album. The band now has a total of six Grammy Awards including three in 2010 for their breakout, RIAA Platinum album, Brothers.

Get The Black Keys Tickets right here at Gigantic.com

Related to The Black Keys