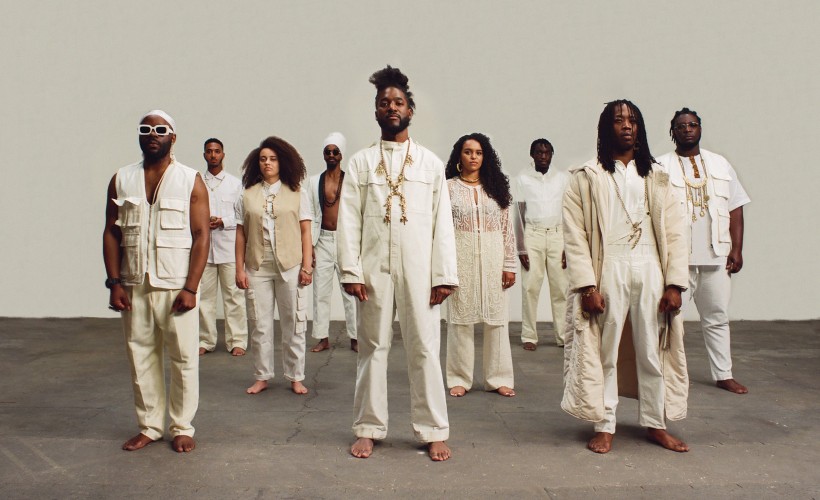 Steam Down have today announced details of a UK headline tour for late 2021, which includes a homecoming date at London’s The Albany on November 17th. The hugely influential London collective recently released the acclaimed ‘EMPOWER’, ahead of their debut ‘Five Fruit’ EP (out on September 24th via Decca). Tickets for Steam Down’s headline tour go on general sale June 11th at 9AM.

After years of building a truly engaged community - and taking London’s melting-pot to the world’s stage - ‘EMPOWER’ marks a thrilling new musical chapter for Steam Down. Uplifting, urgent and emotive, the track affirms the power of the listener, the strength of collective hopefulness, and the textures of London’s inner-city subculture. Featuring the fast-paced verses of Tinyman and Afronaut Zu (alongside Theon Cross, who has played with Kano and Sons of Kemet), here is a sound that bridges grime with jazz, and turns it all into something unmistakably Steam Down.

In Steam Down founder Ahnansé’s words, ‘EMPOWER’ “is all about manifesting confidence, and fortifying yourself in the knowledge that you have the power to overcome, persist and achieve in the face of any adversity you may be dealing with.” It is, too, a conceptual entry-point to Steam Down’s ‘Five Fruit’ EP, which chronicles “changing from the inside out: one emotional state at a time. We are currently living in an unprecedented time, dealing with a global pandemic, political injustice and social unrest. Through times like these we have to change and adapt, and ‘EMPOWER’ is here to aid that inner transformation.”

Steam Down is a collective, a weekly night, and a genuine movement. Formed in May of 2017, the project was born out of Ahnansé’s desire to reconnect to a community: fractured not only by endless touring, but the forces of gentrification and censure threatening the arts across the capital. Lacking a stable and collaborative space in which such creativity could flourish, Ahnansé chose simply to make his own: in Steam Down’s case, their musical Mecca proved to be a railway arch bar in South London, soon home to a frenzied, weekly jam-night infamous for its opportunity for reflection, release...and a lot of sweat. Steam Down has since become the bedrock for a community of all ages, one in which culture was at the foreground, genre was demystified, and pretentiousness was left at the door.

As they prepare to roll out their similarly-immersive debut EP, ‘Five Fruit’ - and head back out on the road in November - Steam Down’s return feels particularly poignant. The collective has already seen the likes of Kamasi Washington, Charlotte Dos Santos, Poppy Ajudha and Jools Holland appear unannounced on their weekly nights, whilst picking up two Jazz FM Awards, playing Glastonbury, selling out Village Underground and headlining Boiler Room’s festival: all up front of their first body of work, which is as philosophical, progressive and musically versatile as you would hope from Steam Down. In and amongst the chaos, integral to Steam Down’s success has also been a remarkable consistency (and the singular vision of Ahnansé), growing their particular village one punter at a time. Theirs is an old-school ethos in modern language and landscape; cross-pollinating the capital as key spaces remain under threat, and providing physical abandon in the digital age. “This feeling of connecting is what we make music for, and after such a long hiatus it feels freeing to start SD Weekly up again. We miss the healing, joy and laughter - and we absolutely cannot wait to welcome you back!”

With equal support across Radio 1, 1xtra, 6Music and FIFA, what the collective have achieved in four years is remarkable - what they aim to achieve on a deeper level (transformation, transcendence, and collective consciousness) is captured vividly for the first time on new single, ‘EMPOWER’.

That's all we have for Steam Down! Check out their upcoming shows