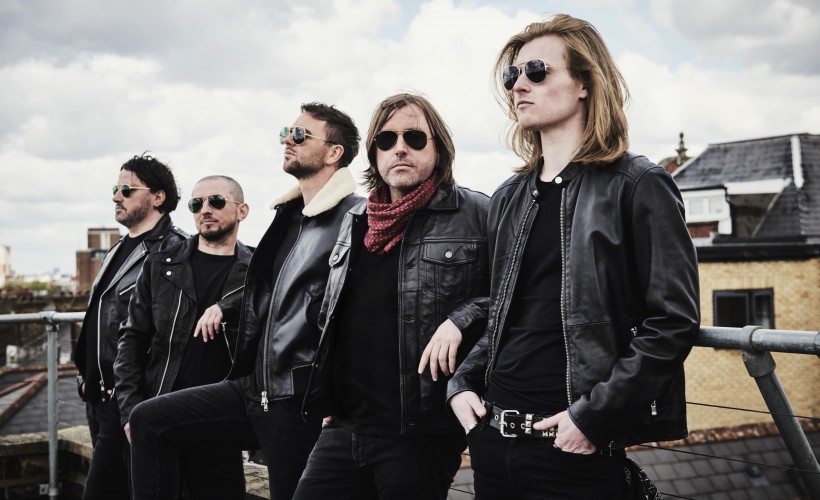 Rounding off their prodigious 2021 with an anthemic rebel yell that we can all get behind, Welsh rockers Scarlet Rebels have unleashed the invigorating 'I'm Alive', the opening track from their upcoming album See Through Blue, out 28th January 2022 via Earache Records.

Pumped with unstoppable energy, 'I'm Alive' sees relentless riffs and rousing vocals chronicle a declaration of resilience and a spirited lust for life. Inspired by frontman Wayne Doyle's own catharsis during the Covid-19 pandemic, 'I'm Alive' is a rallying call to all those who have found a passion for life that they won't release from their clutches.

Doyle comments: “I initially wrote 'I'm Alive' around the defiance of still being in a band and not leaving music to focus on 'real' life, as many suggested I should do. 'Real' life is whatever you make it - especially in light of the pandemic, it's unbelievable to me that anyone would try and draw someone away from their passions. This is a song for everyone who's ever been doubted and stuck to their guns regardless. I salute you!”
An album that defies 'The Enemy' (whether it be an apathetic government or one's own personal demons) whilst ultimately aiming to highlight the importance of fellowship in the current era of discord, See Through Blue is an album that brings important issues to light from a band who most certainly practise what they preach in their music.

In a bid to make real change in the issues that lie closest to their heart (and their music), Scarlet Rebels - completed by lead guitarist Chris Jones, second guitarist/keyboard player Josh Townshend, bassist Wayne ‘Pricey’ Esmonde and Wayne's brother, drummer Gary Doyle - are collecting for local food banks at their headline shows, and those unable to attend their shows are welcome to donate approved items via grocery delivery services like Deliveroo. More information can be found here.
Scarlet Rebels' headline album tour commences on 20th January 2022 through to 12th February 2022.

Full tour dates can be found below.

The Welsh rockers Scarlet Rebels take their awesome second album See Through Blue on the road!

That's all we have for Scarlet Rebels! Check out their upcoming shows