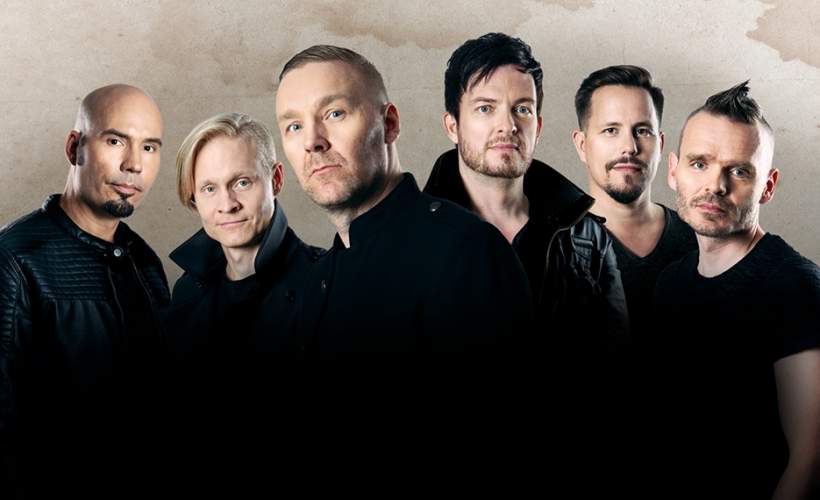 Poets Of The Fall Tickets

Poets Of The Fall Tickets

Poets Of The Fall Plus Special Guests Scala London, London

Everything was fantastic just one BUT - not enough. The show was amazing so everyone wanted more and more. Poets Of The Fall has unbelievable energy which they shared with audience. It was really unforgettable! Thank you!

It was a fabulous night. The support band were very good, really good sound for the crowd to get going.
Poets were excellent as always. With Marko's voice and the whole sound of the band, I could of stayed all night listening to them. Thanks so much

"Poets of The Fall - Force of Nature"

This was in your face power. The gig opened like a hurricane on heat. Its the first time I have seen the band live and I am praying it won't be the last.
Every song was delivered with ultimate passion displaying slick musicianship seldom seen at live gigs these days.
I'm an old rocker (52), whats wrong with the kids these days? they should have stayed and screamed for an encore after the last song - like in the old days. If one set deserved an encore, this was it.
Excellent gig.

Finnish rockers Poets of the Fall - singer Marko, guitarist Olli and keyboardist Captain - started out their musical adventure from scratch in
2003. Marko sold everything he had to invest in pursuing the love of his
life, music, with his buddies Olli and Captain. He moved into his parents’
basement, when he couldn't keep a place of his own any longer. The guys
then built a little studio of their own in Captain's living room for the
recording and producing sessions, and kept an office in Olli's beat up old
car. The result of the recording sessions was a blend of pop, rock, metal
and industrial sounds. Later the guys were joined by guitarist Jaska,
bassist Jani and drummer Jari.
The band's first single was Late Goodbye, written for the acclaimed
computer game Max Payne 2. Reaching millions of people through the
game, the song earned the guys international recognition and the first
prize at the G.A.N.G. Awards in 2004.
Their debut album Signs of Life went straight to #1 on the Finnish album
chart in January 2005, and stayed on the chart for over a year. The next
album Carnival of Rust, released in April 2006, also hit the number one
spot on its first week, with the debut album still on the official Top 40
chart. To date, both albums have sold platinum in Finland. The third album
Revolution Roulette was released in March 2008. It also took the first place
on the album chart, and broke the gold record limit in just a couple of
weeks after its release. The fourth album Twilight Theater, released in
March 2010, sold gold in one week, and made Finnish chart history by
giving the band four number one places with their first four albums. 2011
saw the release of the first song and video compilation Alchemy Vol. 1,
and the fifth studio album Temple of Thought hit the stores in March 2012.
The band's first live release Live in Moscow was released on DVD in 2013,
and the next album Jealous Gods in September 2014, reaching the #1
spot on the album chart.
The band’s next album, Clearview, released in 2016, was produced
together with the acclaimed producer Stefan Boman at Park Studios,
Stockholm. The successful release of the album, reaching top ten
positions on numerous international charts, was followed by a tour running
until the end of 2017, including shows in India, UK, and Middle Europe.
In October 2018, Poets released their eighth album Ultraviolet, which once
again hit the #1 position on the Finnish album chart. Two singles, False
Kings and Dancing on Broken Glass, were released prior to the album. The
third single, The Sweet Escape, saw the band break new ground, as they
also released it in French as Partir Avec Moi.
In 2020, Poets are releasing a series of twelve acoustic singles and videos,
filmed in the prestigious Alexander Theatre in Helsinki. They are also
recording material for various new projects, including the next album.
The singles and videos released from Poets’ albums have received lots of
media coverage, hundreds of millions of video views, and extensive airtime
on radios worldwide. The song Carnival of Rust was the most played
Finnish song in 2006, and singles like Dreaming Wide Awake and Cradled
in Love spent several weeks among the top songs on national radio and
TV. The blockbuster video games Alan Wake, Alan Wake's American
Nightmare and Control featured songs from various albums, as well as
completely new songs, performed as the in-game band Old Gods of
Asgard.
Among others, Poets of the Fall has received the following awards:
• Several gaming industry nominations and awards as part of the
soundtrack team in the game Control, including the Game Developers
Choice for Best Audio
• Best Finnish Act at MTV Europe Music Awards 2006
• Best Finnish Music Video of all time in TV2's Musiikki-TV and Best Music
Video of 2006 at The Voice (video Carnival of Rust)
• Two Emma Awards (the Finnish Grammys) in 2005 - the best debut
album and the best new act The Bronze Muuvi and People's Choice Muuvi
2006 Awards (video Carnival of Rust)
• Best Finnish band at the NRJ Radio Awards 2006
• Commercial Radio Stations' Newcomer of the Year Award in 2005
Poets of the Fall has toured in Finland, Sweden, Norway, Denmark,
Germany, Austria, United States, Estonia, Russia, Ukraine, Lithuania, India,
Romania, UK, Belarus, Netherlands, Italy, Hungary and France. The band
has played sold out shows in major cities like Moscow, Paris, London,
Amsterdam, Budapest and Stockholm