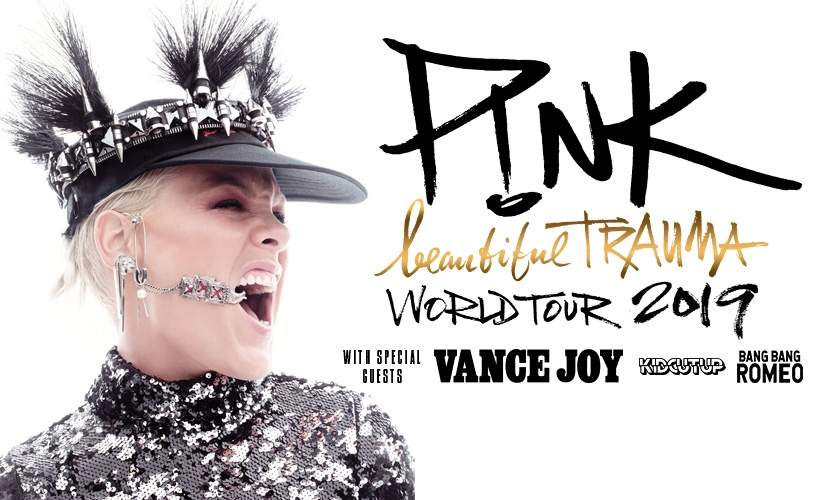 P!nk and her artists gave the performance that will be remembered for years to come. We saw her in Dublin and waited for this tour, it didn’t disappoint. From tickets being available,ease of using gigantic website to purchase and delivery of tickets to turning up at Wembley Stadium with anticipation of an amazing night. Oh my days we were given a performance that raised the roof. We danced and sang with P!nk, where moved and touched by her ethics and compassion. We even had the honour of Willow’s appearance on stage who’s as talented a lil lady as her Mum. Many thanks to all involved in giving s the night of our lives, fingers crossed P!ink tours in uk again, best artist ever!

"Absolutely fabulous singer and entertainer, Pink is worth every single pound I spent on my ticket"

No problems with my ticket unlike feedback I've read from other sellers, thank you Gigantic

Absolutely fab service by GIGANTIC 👍 fast efficient and tickets arrived in plenty of time for show! Would have no doubts in using this company for future shows and events 👍😀
How do I describe PINK show? Truly fabulous show and unbelievable performer WONDERFUL 💕💕💕💕💕💕💕💕💕

Amazing, incredible these words do not even touch on this performance by pink. She is just the most amazing performer. Really enjoyed the show! The venue was fine all the staff helpful nothing was a bother well organised I felt.
Gigantic were really good aswell, updated me when tickets would be posted, then when they had been posted so I knew they were on there way.

Tweet
Pink has announced a massive tour which takes her to Principality Stadium at Cardiff, Hampden Park at Glasgow, Liverpool’s Anfield and Wembley Stadium in London during June 2019.

You know just how exciting this is, and with the demand growing as more people find out you will have to act fast and ensure you book your Pink tickets before they all are taken. Placing an order for your essential gig ticket is made easy with Gigantic as you can access the site 24/7 with a smartphone, tablet or on your computer.

Leading a busy life, it is easy to forget when your favourite gig tickets are going on sale and miss out. So, set a personal reminder with Gigantic and then you will be alerted with a text message or an email just prior to their release at 10:00 on Tuesday 23rd of October.


With her spine-tinglingly raspy voice, hard hitting lyrical content and edgy personal style, Pink, whose real name is Alecia Beth Moore, is an act like no other. Described by Los Angeles Times’ writer Ann Powers as ‘the most trailblazing artist’ of her time, this gutsy female singer has taken the world by storm since the release of her first album ‘Can’t Take Me Home’ in 2000.

A year later, her follow-up record ‘Missundaztood’ went to number two in the UK Album Chart and made it into the top 10 of the US Billboard 200. The pop-rock album spawned numerous hit singles, including ‘Get the Party Started’, ‘Don’t Let Me Get Me’ and ‘Just Like a Pill’. Well received by fans and critics alike, the album made the Pennsylvania-born singer a household name.

Since 2001, Pink has written four critically-acclaimed studio albums, entitled ‘Try This’, ‘I’m Not Dead’, ‘Funhouse’ and ‘The Truth About Love’. The singer has also released three live albums, 24 singles and 33 music videos. Her work to date has earned the artist a number of august accolades, including three Grammys and four Billboard Music Awards.

You don’t need to be a diehard fan of her music to enjoy Pink live. A born performer, this is an artist who knows how to put on a show. Highly-orchestrated, spectacular events, Pink concerts are feasts for the eyes, as well as the ears. With daring acrobatics, multiple costume changes, catwalks and burlesque dancers, audiences are guaranteed an action-packed night.

To find out when the next Pink UK tour goes on sale, stay tuned to Gigantic. Pink tickets have been known to sell out quickly, so if you want to experience one of her showstopping performances in person, do not make the mistake of hesitating.

Pink wins Outstanding Contribution To Music at the BRIT Awards 2019

Book your tickets for Pink with Gigantic!