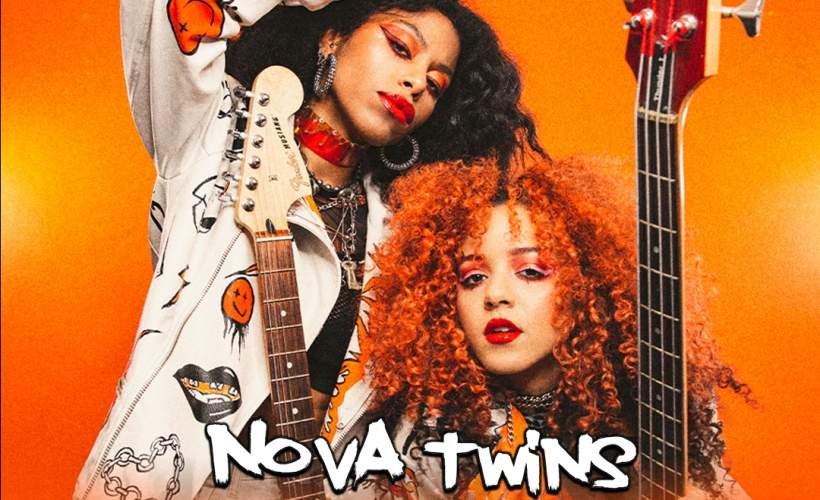 Tweet
Nova Twins are a genre-bending duo consisting of lead vocalist/guitarist Amy Love & bassist Georgia South. Innovative in every element of what they do as artists, whether that’s performing to moshing crowds & packed out tents, art directing their own music videos or designing & making their outfits for all photoshoots & stage-wear. Described as “devilishly-heavy & vivid punk-rock” by NME, “grunge-pop” by the Independent & “amalgamation of raw punk energy, illegal rave electronics & unapologetic grimey attitude” by PRS.

On tour they’ve supported Wolf Alice, Prophets of Rage, Skunk Anansie & have been invited to support Enter Shikari 2021. Previous festivals bookings have included Boomtown, Download & Hellfest. 2021 will (covid depending) see slots at Reading & Leeds and Lowlands amongst many others.

In 2019 Nova Twins were the face of Dr. Martens Alternative A/W campaign & played alongside Fever 333 during their BBC Radio 1 Maida Vale session. In 2020, they won Best UK Breakthrough Band at the Heavy Music Awards. Later that year, they collaborated with Bring Me The Horizon on track ‘1X1’, taken from the No. 1 album - Post Human : Survival Horror. Nova Twins started 2021 with a remix of Gang of Four ‘Where the Nightingale Sings’ alongside Massive Attack‘s 3D/Robert Del Naja.

Check them out today

Nova Twins are the new l'enfants terrible on the block. With badass bass lines, killer hook making amazing tunes, they are the band you need to know. The perfect pair unites Amy on guitar and vocals with bassist Georgia. Check them out today!

“Two piece creating a genre of their own, Urban Punk sums it up perfectly…with vocals as sharp as the busted windows of an East London derelict factory and basslines that Bruno Mars’ bassist would be proud of. Reminds me of old-school lively Hip-Hop. These guys have got it all.” Alex Baker Fresh Blood/Kerrang!

As the word spreads the excitement builds resulting in a huge demand for Nova Twins tickets. We really do recommend booking early as they will sell very quickly. Fortunately, selecting and making your gig ticket booking is made easy with Gigantic as you can access the site 24/7 using your tablet, computer or smartphone whilst in the comfort of your home or whilst busy on the go.

With only limited supplies of Nova Twins concert tickets being made available, you will have to act fast and ensure you pick up yours before they all go.

Gigantic has a well-earned reputation for excellent customer service and with a vast array of essential gig tickets to choose from, it is little surprise that we were chosen by Nottingham Post for their illustrious ‘Retail Business of the Year award’. So, you know we are the very best place to come whenever you are booking for your big night out.

Nova Twins appear on Bring Me The Horizon EP!